All part of the Rimac buying experience.

Nico Rosberg is indeed a fortunate man. The former Formula One champion is in the process of buying what is perhaps the fastest and most sophisticated supercar on the planet: the Rimac C_Two. You may remember we posted a video covering the initial part of his buying experience a few days ago as he toured the facilities of the company's Croatian headquarters.

Apparently, one does not simply create a single video to cover the entire buying process – especially when there is so much involved – and so Rosberg released a sequel to the initial chapter recently. It starts at the design studio where the initial video left off and Rosberg is shown all his colours and options.

Clearly, some of this has already happened ahead of this trip, as we later learn some switches located on the dash have already had their respective functions chosen by Rosberg. It also includes further looks at the Rimac facility, with emphasis on the engineering and battery production sections and we learn even more about the sophistication of this system. You can watch the second chapter in its entirety below.

The reason you are here, though, is the video at the top of the page. This is where we finally get to see footage of this former Formula One champion, the first non-Rimac employee, driving this most-advanced C_Two prototype.

At the start we learn that this vehicle is about 90-percent of what the eventual finished vehicle and that its power has been limited to about 75-to-80 percent of its eventual full level. Considering that this initial outing is on a beautiful mountain road instead of the track, that limitation doesn't striking us as too bad.

After a bit of explanation, we finally get under way with Rosberg behind the wheel and CEO Mate Rimac in the passenger seat. We don't know whether the road being used has been closed to the public but if it hasn't, it's fair to say some traffic laws may have been broken.

Rosberg seems quite impressed with the C_Two's abilities in the turns in sport mode. To perhaps push it a little harder in "track mode," Rimac gives up his seat to the company's test driver Miroslav Zrncevic who has a lot more track-mode experience to guide Rosberg. As they get underway, Zrncevic goes through some of the significant changes to the car's performance profile.

More about the Rimac C_Two 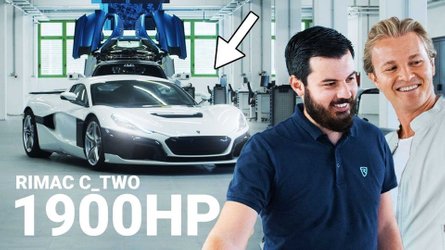 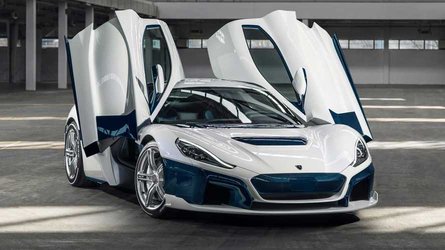 Unfortunately, the prototype develops a small issue with the brakes during this part of the drive, so to play it safe, the test-drive is ended and engineers are brought up the mountain to examine and resolve the issue. And while it would have been great to hear more feedback from Rosberg about the car during this part of the drive, he mostly discusses the experience of driving a vehicle in development for the first time.

So, while the video may not contain exactly everything we wanted to hear about the car, it still ends on a good note. Rimac says the car will be finished in about 6 months and that, as he had promised, Rosberg will be the first to drive it in anger on a proper track. Join us, as we count down the days to what should be an extremely brilliant adventure.