Hamilton explains Brawn role in convincing him to join Mercedes 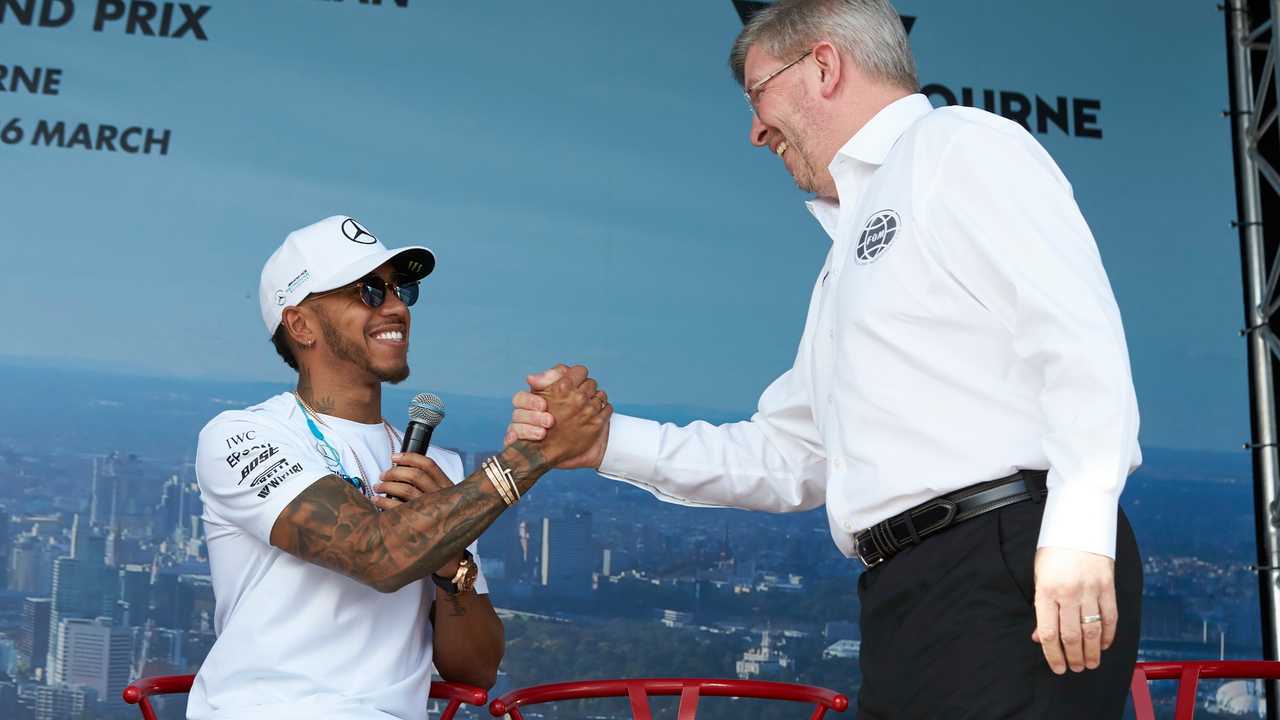 Lewis Hamilton says Ross Brawn made the breakthrough in convincing him to join Mercedes’ F1 team for 2013.

Hamilton wrapped up his seventh F1 world title last weekend in Turkey to equal Michael Schumacher’s all-time record, having won six of the championships with Mercedes.

Hamilton quit McLaren at the end of the 2012 season to join Mercedes in what at the time appeared to be a shock move, only for his subsequent success to prove it was the right decision.

Much of the work to convince Hamilton to leave McLaren in 2012 lay with Mercedes’ non-executive chairman and three-time F1 world champion Niki Lauda, with the pair striking up a strong bond and friendship in the years that followed.

But Hamilton recently revealed that he remained unsure about Mercedes’ future plans following his early chats with Lauda, and that it was Brawn - then Mercedes’ team principal - who managed to convince him.

Hamilton taking place in the history of F1:

Hamilton has put car vs driver debate to rest - Lowe

“I’d spoken to Niki back home in Monaco, I was talking to him and he was talking to me about coming,” Hamilton said, reflecting on his decision to join Mercedes.

“I’m pretty sure he was the first one I had spoken to. He was like, ‘you’ve got to come to the team!’

“I wasn’t convinced necessarily at the beginning. I think the convincing stage which really made me look into it more was when Ross came around my mum’s house, and sat with me in the kitchen. We had tea, and he showed me what the plan is for the team.

“That was the real in-depth insight into what the team was planning, the changes they were trying to do. That was really the selling point.”

A key moment in Hamilton’s decision to join Mercedes came at the 2012 Singapore Grand Prix, when he met with Lauda to discuss further details about the deal which was announced five days after the race.

Hamilton said their chats in Singapore were an important part in the start of their friendship, and helped clear up some perceptions of what Lauda was like.

“The important part of Singapore, I think Niki and I - perhaps maybe more so for him - realised that we had a lot in common,” Hamilton said.

“That really was the start of our friendship, because I remember him saying to me, ‘you’re a lot like me’. I think he realised that we had a lot more in common than perhaps he had previously thought, since we hadn’t really spoken before. It was all done on assumption and what people write.

“I say it time and time again, it was far beyond my wildest dreams thinking I would get to seven [titles]. Getting one world championship was great. It was tough obviously to get the second, and I spent years trying to work at trying to help the team win another world championship.

“Then I had to make a big decision, whether I stayed put and keep trundling along, or go and do something more adventurous. I took that leap of faith, and then we’ve gone one after the other here.

“I knew I made a good decision when I made the decision. I knew it was the right thing for me. But jeez, did I know that we would win six world titles? No.

“I think what it says is that in life, we’ve got to make sure that we take that leap of faith, do what you think is right for you and not what people tell you to do, and do the homework so you have the pros and cons, and then go with it.