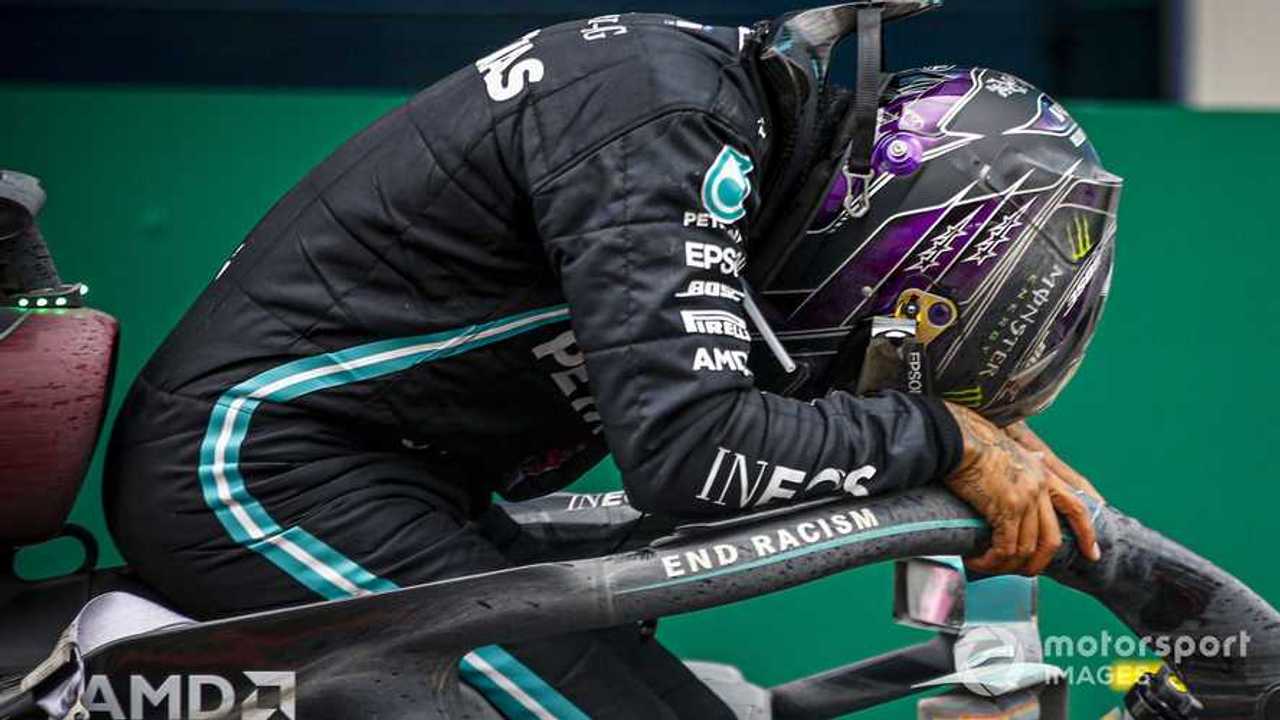 Hamilton had all the emotions of his past on the last laps of his victory in Turkey, telling himself "keep it together, you got this".

Hamilton won a thrilling and chaotic wet race at Istanbul, where his Mercedes squad had come into the event on the back foot after struggling to get the hardest compounds of Pirelli's tyre range working on the low-grip track surface.

The Briton, who clinched his record-equalling seventh world title with the win, had run at the back of the pack of early race leaders – at one point dropping to 24.063s behind long-time leader Lance Stroll, after the first round of pitstops – before he rose to the front, finding pace once the field switched from full wet tyres to intermediates.

In the end, he came home with a 31.633s margin of victory over Stroll's Racing Point teammate Sergio Perez and was audibly overcome with emotion after he had crossed the line.

When asked about his reaction in the post-race press conference, Hamilton said: "Very rarely do I ever like lose control of my emotions and those last few, and obviously we were having that discussion about whether we were going to pit, and I was just telling myself: 'keep it together, Lewis, you got this'.

"And I could feel it getting closer, also knowing 'if I finish when I'm finishing right now, I've got this championship'.

"So, all these emotions were running through me and I was trying to stop it because I was thinking about all my whole career – from when I was five driving in go-karts and when we won our first British championship, driving home with my dad singing 'we are the champions' and dreaming of being here.

Hamilton: I want to stay in F1 for a chance to change world

"And it's right there, minutes away. That was a lot to take in. When I came across the line, it really hit me and I just burst into tears - I think that whole in-lap.

"Then I really couldn't get out of the car because I just couldn't believe it.

"For me, I've been very strong but I couldn't have done it without the great man behind me, my dad, who on the days that I didn't think I was good enough or wasn't going to do well enough he stood me up and kept me going.

Hamilton joked that after reaching parc ferme to celebrate his 94th F1 win, he "didn't want the visor to come up and people to see tears flowing and all that stuff" because "I'd always said that I'd never let you see me cry!"

He added: "Because I remember watching other drivers in the past crying – and I was like 'I'm not going to do that!' But it was too much."

Hamilton explained "the key today was really just keeping my wits about me – learning as I went [as well]", when asked by Motorsport.com how he adapted his approach to gain time on his rivals after moving to the intermediates.

"And I then was just chipping away, getting faster and faster, and more and more confident as I went on," he concluded.