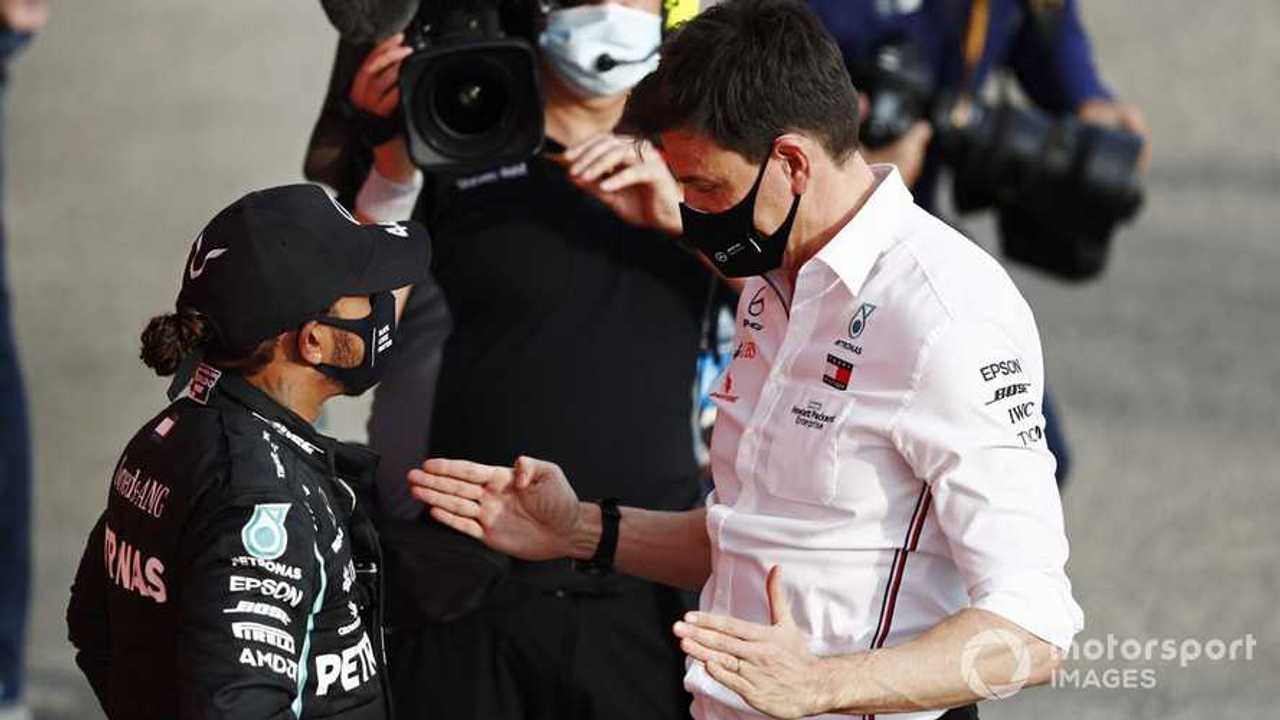 Mercedes boss Toto Wolff is clear that he and Lewis Hamilton are "not finished" with F1, despite ongoing speculation about their future

Wolff is weighing up a new role within the Mercedes F1 team as he ponders a long-term succession plan, while Hamilton said on Sunday night that there was no guarantee he would race on next year.

Speaking to journalists at Imola about the future of Wolff and what impact his departure would have on the team, Hamilton had said: “I don't even know if I'm going to be here next year, so it's not really a concern for me at the moment.

"We have a lot of deep conversations, Toto and I, so I'm very aware of where he is mentally, and we share a lot of and carry a lot of the weight together I think.

"I've been here a long, long time. I can definitely understand wanting to pull back a little bit and giving more time to family and those sort of things."

Hamilton’s comments doubting his own place at Mercedes fuelled talk that he could shock the sport and quit after claiming a record-equalling seventh world championship this year.

But Wolff has insisted that there should be no doubts over his or Hamilton’s future, as he said both their futures would get sorted together.

“I think we go together in a way,” said Wolff. “We have a symbiosis and obviously it's important where our heart is and mindset is for next year.

“But I've said that this is my team. I'm in a very proud corner with Mercedes and I'm not going to go anywhere.

“My role may change in the future, and it's something that he is asked and, and I think nothing is ever secure.

“It was like Niki Lauda in the 1970’s: you could wake up one morning on a Friday or Saturday morning on a track and say: 'I'm just not having fun anymore.' And I think that can happen to anybody.

While neither Hamilton nor his team boss are under contract for next season at such a late stage of the year, Wolff said that the delay in both deals has been caused simply by the team wanting to focus on wrapping up the world titles.

“With Mercedes and I, we are pretty much clear: it's just down to putting pen on the paper at the right moment,” he said.

“I was also concentrated on bringing these championships home and it always feels not right to spend days with lawyers and M&A [mergers and acquisitions) people, when I'm so focused on just what's happening on track.

“I think that this is where Lewis and I are very similar. It just didn't feel the right opportune moment to sit down before those championships were not done.

“And there will be a moment when the drivers’ championship is going to be decided, to sit down. And we have a few months before the first race happens in Australia.”