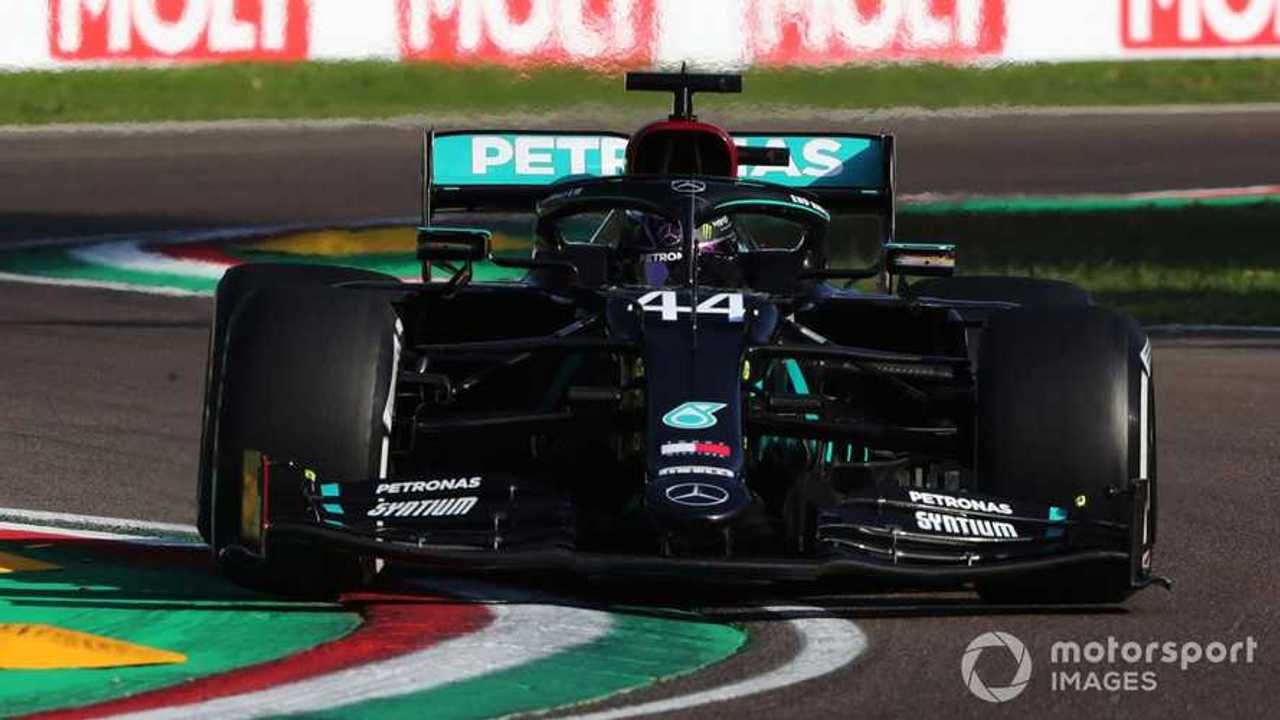 Hamilton easily survived a five-lap shootout to the finish following the Red Bull's dramatic spinning retirement, racing away from Bottas, who had led the early stages before losing ground due to floor damage as he ran ahead of Verstappen.

At the start, Bottas comfortably led away on the long run to the Tamburello chicane, but Hamilton, although he reacted well, lost ground to Verstappen as they progressed through their acceleration away from the line.

Verstappen was alongside by the time they arrived for the braking zone for the left first part of Tamburello and he easily moved into second place, with Hamilton even forced to defend slightly against Daniel Ricciardo, who had moved up fourth when Pierre Gasly was crowded out by the second Mercedes ahead on the approach to the race's real first corner.

The top three quickly raced clear, much as they have at many other events in 2020, with Hamilton tracking Verstappen within a second early on, before falling back out of DRS range after he had reported difficulty following the Red Bull.

By the start of lap eight of 63, Ricciardo was already over 10s off first place, as the top three were able lap in the 1m19s bracket – more than a second quicker than the rest at this stage.

Bottas gradually edged his lead up to the two-second mark by the start of lap 16, where he was told to push as the soft-starting runners behind the top three began to pit to get rid of their suffering rubber.

The Finn set a string of fastest laps in the 1m18s, with Verstappen only able to reach that pace two laps later, with the Red Bull coming in at the end of lap 18 to take the hard compound tyres.

Bottas followed him in on the following tyre, easily rejoining in front, while Hamilton was told he would be extending his stint in a bid to jump Verstappen.

Hamilton had been nearly two seconds behind the Red Bull before it stopped, and so now Mercedes concentrated on how to get the world champion back into second place.

He produced a series of fastest laps, briefly reaching the 1m17s, before Mercedes asked if he could go considerably longer as he reached the rear of the pack to lap the backmarkers.

Bottas, who was informed he had picked up floor damage on the left-hand side of his car in the second lap, possibly as a result of striking debris from another car, was just keeping Verstappen out of DRS range, but was regularly lapping slower than his teammate, before being told he was "one-second unsafe" to Hamilton on lap 30.

Russell to stay on at Williams after 'confusion' over future

The lap before, Esteban Ocon had pulled over on the run to the Variante Alta with a suspected gearbox problem, and as the Renault was being recovered, race control opted to activate the virtual safety car.

This gave Hamilton the chance to pit and he rejoined easily still in the lead, with a near four-second margin to his teammate.

In the second half of the race, Hamilton quickly extended his lead over Bottas as he lapped in the low 1m18s, reaching a 10-second advantage at the end of lap 40.

As Hamilton was untroubled up front, Bottas had to fend off Verstappen with his hobbled car.

He was able to stay ahead despite dipping his wheels into the gravel trap on the outside of the two Rivazza turns on lap 36, but when he went deeper into the gravel at the same spot six laps later, Verstappen got his chance to retake second.

He used DRS to close on the momentum-robbed Mercedes, and roared ahead around the outside on the approach to Tamburello at the start of the next lap.

Verstappen immediately reached Hamilton's pace, but was unable to close his 13s lead before he dramatically retired from the race on lap 51, when a sudden puncture of the right-rear of his car spun him off and out in the gravel at the Villeneuve chicane, coming to rest with his right-rear tyre destroyed.

Bottas pitted for used softs immediately as the safety car was called, but Hamilton was forced to wait an extra lap, and just rejoined ahead of his teammate, warned urgently to respect the delta time to avoid a penalty.

The race restarted on lap 58 – extended after George Russell crashed while following the safety car on the approach to the first part of the Acqua Minerali double-right, spearing into the wall on the outside of the track and out of P10.

Hamilton streaked clear from a 0.6s lead at the restart, lowering the fastest lap considerably in the final tours, setting it for good on the last lap, to win by 5.7s over Bottas and seal Mercedes' seventh constructors title in succession.

In the pack behind, Ricciardo took what had at one stage looked like an unlikely best-of-the-rest finish in third for Renault.

The Australian was boosted up to the final podium spot by not stopping under the safety car, while Sergio Perez, who had risen up ahead of Ricciardo from 11th on the grid, starting on the advantageous mediums and running longer in the first stint as a result, did come in.

Kvyat used it best, shooting up to fourth when the race resumed – including a brave pass on the outside up the hill to the Piratella turn – but he could not cut into Ricciardo's advantage and finished 0.8s adrift at the flag.

Leclerc held onto fifth, with Perez sixth after passing Albon at the Villeneuve chicane and the Red Bull spinning down to last place on the exit.

Sainz was seventh ahead of his teammate Norris, with Alfa Romeo pair Kimi Raikkonen and Antonio Giovinazzi rising up from P18 and last on the grid to take the final points positions.

Raikkonen ran longest of anyone before stopping, getting into the points after the two late crashes, with the safety car boosting Giovinazzi who had run the reverse strategy to his teammate, stopping early after starting on the softs.

Nicholas Latifi finished 0.7s off the first point of his F1 career in 11th, leading home Sebastian Vettel, Lance Stroll and Romain Grosjean – who all stopped under the safety car while the Williams did not (Stroll knocking over his Racing Point jack-man as he slid into his pitbox with cold brakes).

The other non-finishers were Kevin Magnussen, who retired in the pits after reporting his car's upshifts were giving him a headache, and Gasly, who also came into retire – in his case on lap seven.