The Tesla driver admits he likely made the Honda CR-V driver mad. Why would he do that?

This Tesla Model 3 driver calls the Honda CR-V driver's actions an "intentional assault." He also calls the CR-V driver "deranged," though we're pretty certain he doesn't know the driver personally or have any idea of his mental state. "Dangerous" may have been a better choice of words here.

Upon watching the video, it appears that the "intentional assault" part may be true. The Tesla driver explains that the CR-V driver was far behind him, but moving quickly, when he made his lane change to the right. It's important to note that he was driving the Model 3 on his own, Tesla Autopilot was not engaged. He had to react quickly to avoid a crash.

The Model 3 Performance driver admits that the CR-V driver was likely mad that he moved into the right lane. No matter how mad you get while driving, you have no right to engage in driving behaviour with the intent to hurt or injure someone or damage their car. However, to help avoid such issues, it's important to drive properly. If you are aware that a driver is probably mad about your driving choices, you are clearly making driving choices you should be avoiding. 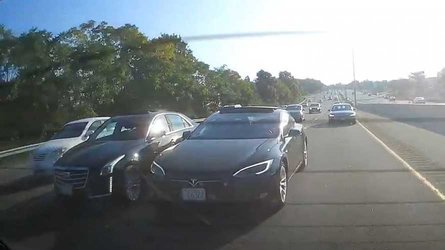 Should the Model 3 driver have made what appears to be a last-minute lane change to the right? Arguably not. This type of driving tends to set people off. However, since we weren't there, and speed is hard to realize in a video, we have no way of knowing for sure. Either way, it doesn't make the CR-V driver's intent to scare or sideswipe okay.

Keep in mind, you could be driving like a saint and someone could still engage you with road rage. However, most often, these videos reveal bad driving choices on both sides. Regardless, it doesn't make it right.

Check out the video and provide us with your take in the comment section below.