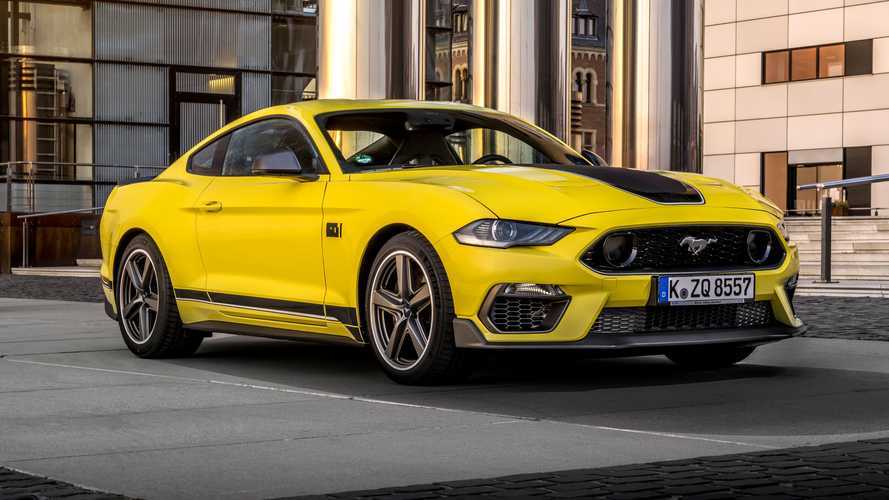 It was the same story with the Bullitt.

At the end of August, a prototype of the Mustang Mach 1 was spotted undergoing testing at the Nürburgring. Many people assumed Ford was fine-tuning the latest iteration of the pony car for European tastes, and it turns out they were correct. Shortly after announcing plans to sell the spicy 'Stang globally, the Blue Oval is officially unveiling the Euro-spec model.

It’s a bittersweet premiere seeing as how the Mustang Mach 1 for the Old Continent is significantly down on power compared to its American counterpart. The naturally aspirated 5.0-litre V8 produces 453 bhp (338 kilowatts) and 529 Newton-metres (390 pound-feet) of torque, which although healthy numbers no doubt, the US-spec model has an extra 27 bhp and 40 Nm (30 lb-ft).

If you recall, it was a similar story with the Bullitt as the previous special version of the Mustang also had an output handicap in Europe. It likely has to do with the more stringent emissions regulations, prompting Ford to dial down the powertrain in order to legally sell the Mach 1. Even so, the company claims it’s the quickest Mustang around a track ever sold in Europe.

Much like the North American variant, the model will be sold with a choice between a six-speed manual gearbox and a ten-speed automatic. It inherits the bits and pieces borrowed from the GT350 and GT500, along with aerodynamic upgrades and the exclusive 19-inch alloy wheels wrapped in Michelin Pilot Sport 4 rubber.

Ford of Europe isn’t talking performance numbers just yet, but it goes without saying it’s a little bit slower than the American model because of the lower output. Regardless of the gearbox you go for, the car is equipped as standard with a mechanical differential lock on the rear axle for better traction. It also gets a bespoke exhaust with active flaps, while the interior hosts an individually numbered plaque.

The order books will open in Germany in the near future, with pricing to be released closer to launch. To give you an idea about how much it will cost, the US-spec Mach 1 is about $4,000 more expensive than the Bullitt, a model priced from €54,443 in Germany.