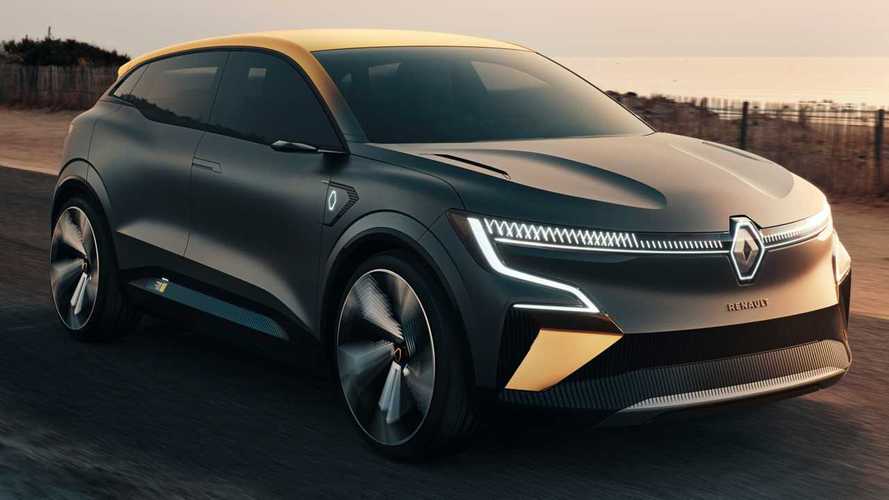 A production version is coming in 2021.

The Renault Megane eVision concept imagines the styling of an electric version of the brand's five-door hatchback. It rides on the brand's new modular CMF-EV platform for future EVs and uses one of the thinnest batteries on the market. A production version of this vehicle debuts in 2021.

The Renault Megane eVision's offers a fresh vision of the classic five-door hatchback appearance. As an EV there's not much need for a traditional grille, so the designers use this space to emphasise the lighting, including a strip of LEDs running the width of the nose. Scooped out sections of the hood create a central ridge that keeps the face from looking too flat.

Flush-mounted door handles make the sides look particularly smooth, and they pop out when a driver or passenger approaches. A gold colour gradient starts at the lower part of the A-pillars and then flows over the roof. It rides on specially sculpted 20-inch wheels with a shape that works with the bodywork to improve the aerodynamics. The lighting runs the full width of the rear, and they have vertical lines of LEDs inside this strip.

Mechanically, the Megane eVision has a 60-kilowatt-hour battery. The motor produces 215 bhp (160 kilowatts) and 221 pound-feet (300 Newton-metres) for driving the front wheels. Acceleration to 62 miles per hour (100 kilometres per hour) takes less than eight seconds. Rather than offering an exact range, Renault says the production version of this concept would be capable of driving from London to Newcastle, which is a distance of about 280 miles (451 kilometres), "in the same amount of time as internal-combustion vehicles, stops included."

The Megane eVision's CMF-EV platform is an underpinning for future Renault-Nissan-Mitsubishi Alliance vehicles. It features a smaller engine compartment than usual since electric motors are more compact. Batteries can fit into the vehicles either vertically and horizontally. Placing the wheels far into the corners shortens overhangs and maximises interior volume.