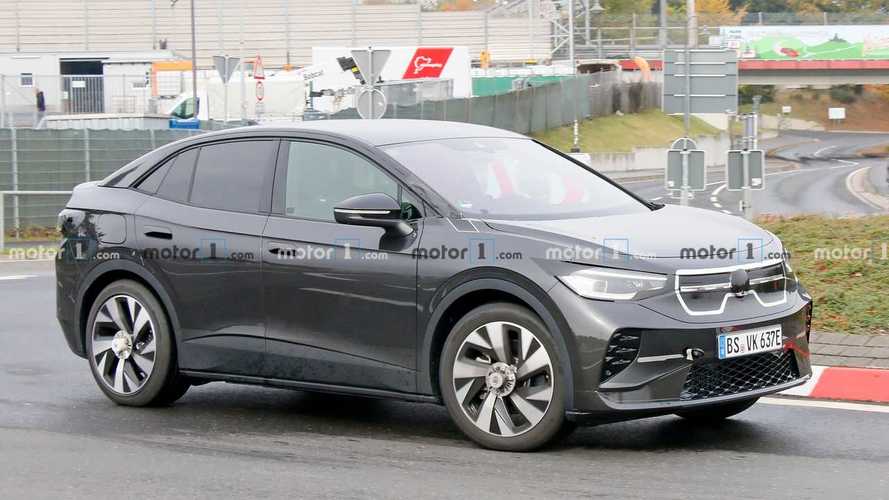 Volkswagen has big plans for the recently released ID.4. The German company sees its all-electric crossover as a direct rival for mainstream models like the Toyota RAV4, Honda CR-V, and the likes, and believes it has the qualities to become a strong seller. In order to meet the demands of a wider group of customers, the Wolfsburg-based automaker is already working on an alternative body style.

What you see in the gallery below are new spy photos of a coupe-fied crossover based on the ID.4. Its name is unknown at the moment with names like ID.5, ID.4 Coupe, and ID.4 GTX believed to be under consideration. Whatever the name, we’ve spied this new zero-emission SUV making laps around the Nurburgring.

It’s weird to see that Volkswagen has decided to camouflage the front end of the car and make it look like the Opel Grandland X. After all, we’ve all seen the final design thanks to the ID.4 and the changes are expected to be focused at the back.

There, the ID.5 (name obviously not confirmed) will get a sloped roofline and a more rakish rear window. The rear fascia seems to have a slightly modified design with the most notable feature being the new fixed spoiler with integrated third brake light. There’s also some sort of a bumper diffuser but the final design of that part is not visible yet.

Needless to say, the coupe-crossover will share its entire tech base with the ID.4. This means a single-motor powertrain should be available at launch with 201 bhp (150 kilowatts) and 228 pound-feet (309 newton-metres) of torque. A dual-motor setup should join the range at a later date offering 302 bhp (225 kW).