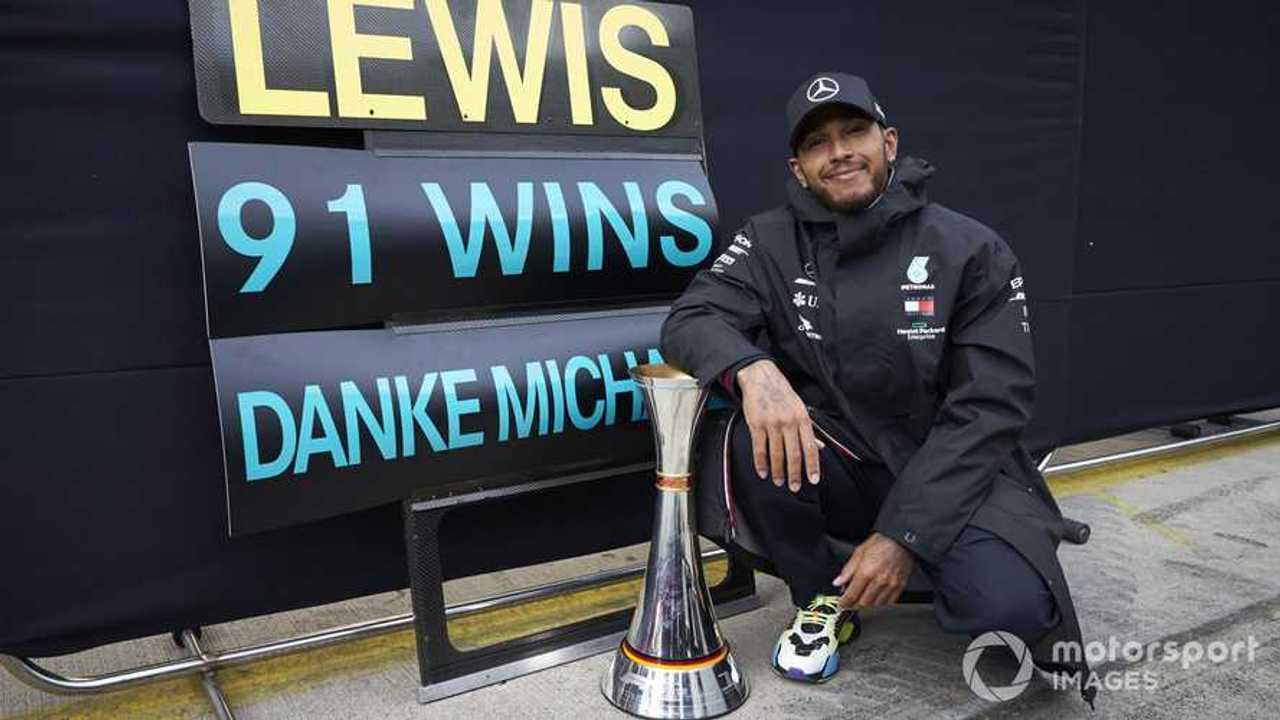 It marked the first time since Belgium 2001 that Schumacher had not stood alone at the top of the win charts, with his final victory coming at the 2006 Chinese Grand Prix.

Hamilton received one of Schumacher’s race-worn helmets from his final F1 season to mark his achievement, presented by the seven-time world champion’s son, Mick.

Hamilton admitted after the race that he had not realised he had matched Schumacher’s record until he entered the pits following his win, but said he was keen to take full stock of the feat in the coming days.

“I'm definitely going to take this next couple of days to really try to understand, let it marinate,” Hamilton said.

“But what I cannot do is drop the ball. I cannot take my eye off the ball for a second. Yes, I have a [points] gap, yes we've got these great wins, but the championship is still to be won.

“I don't know what this week will hold. There’s still lots of conversations, Zoom calls that I have with Formula 1 in terms of all their plans, I've got lots of [Hamilton] Commission calls that I continue to have every week.

“I’ll be back in work mode, but I think it's very important - this moment will pass very quickly and we'll be onto the next thing.

“You know how I've got a bad memory, so I've got to somehow make it stick.”

Bottas 'would need a miracle' to beat Hamilton to F1 title

The result saw Hamilton extend his lead at the top of the F1 drivers’ championship to 69 points with six races to go this year, putting him in a strong position to win a seventh title.

Doing so would see Hamilton match another of Schumacher’s records, and make him F1’s statistical all-time greatest.

Asked how it felt to be rewriting the history books with his on-track achievements, Hamilton said it was a hard concept to try and fully understand.

“I think it’s really hard to suddenly be rewriting history, that’s a very hard idea, for me personally,’ Hamilton said.

“I can only speak of my experience. It’s really hard to compute that and put that into reality and meaning.

“Of course I’ve looked at, and I still watch, other people who I call legends in other sports who are chasing historic moments and titles, records that were broken by great legends in the past.

“It’s different watching from the outside to being in it.

“But what I can say is that I’m not done yet. I still feel that I’m able to improve. I’m driving at a really good level.”