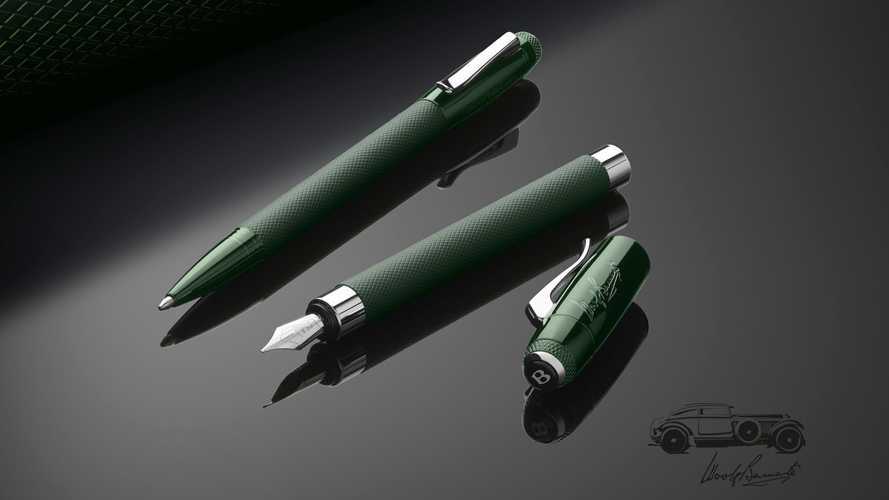 It has the badges and the green paint, but no wheels. Or engine.

Buying a Bentley is not a cheap affair. Even the cheapest models in the range command six-figure price tags and an options list longer than Inspector Gadget’s arms. But now there’s a Bentley that’s somewhat more affordable – if you don’t mind quite literally writing off £450.

No, the Bentley in question does not come with satellite navigation, Bluetooth connectivity or leather seats, but it’s small and easy to handle. Because it isn’t a car at all. It’s a pen.

Yep, the inter-marque battle for the poshest merchandise on sale has stepped up a gear, and Bentley’s new addition has, at a stroke, put itself up with the best of them. Just think what this would look like alongside your Ferrari hi-fi or signing the cheque for your new Porsche espresso machine.

Bentley gets all lifestyle with a new fragrance for men

It’s called the Limited Edition Barnato, and it was made to celebrate the 90th anniversary of the infamous Blue Train Race, which saw ‘Bentley Boy’ Woolf Barnato pit his Bentley Speed Six against a real locomotive. The Blue Train swept passengers from the Cote d’Azur to Calais, but Barnato’s big sports car blew the steam train away, arriving on the north coast so far ahead of the train that he decided to carry on to London. Barnato arrived at the Conservative Club on St James’ street four minutes before the train pulled into Calais.

The pen, which is a Graf von Faber-Castell creation, features a lacquered metal barrel in the dark ‘racing’ green colour often associated with Barnato. The barrel is carefully hand-guilloched in the signature diamond pattern seen across the Bentley range, while the chrome-plated front and end sections get a dark green glaze. The cap is adorned with the Bentley B logo, as well as Bentley-style knurling and Woolf Barnato’s original, handwritten signature.

Just 1,930 pens have been made to honour the year the race took place, and the edition number is engraved on the threaded ring of each pen. This series features three versions, giving customers a modicum of choice. You can go for the Fountain pen with a stainless steel nib, which is available available in widths (M, F, EF and B) and with a cartridge converter system, or you could opt for the Rollerball pen or the Ballpoint with a large-capacity refill in standard size.

All three versions are available to order from the Bentley Motors online shop now, but the first examples will not arrive with customers until next month.