Can you run a motorcycle under water?

Bikes and Beards finds out.

Wouldn't it be nice if you could ride your motorcycle across rivers, lakes, and oceans to take it literally anywhere you want to go? The problem, of course, is that motorcycles can't run underwater. Or can they? To answer the burning question that literally nobody is asking, Bikes and Beards took a spare cheap Chinese motorcycle they were sent for free and decided to find out.

After some forklift driving that's almost as bad as my former coworker, they get to work modifying the bike for its watery plunge. As we know, an internal combustion engine needs three things to run: air, fuel, and spark. The fuel already has its own self-contained storage and delivery system, so that's the easy part. They do use a secondary fuel tank, though, that remains above the water level. This ensures that no water leaks into the petrol tank and ruins their fun.

Spark can be tricky underwater because water is a conductor. The solution (or at least the quick and easy workaround) is dielectric grease. This is the stuff you use on spark plug wires to make sure nothing gets in and corrodes the electrical connections. If some is good, more is better right? They goop the heck out of every single connection on the bike, hoping to keep them try. They go a step further with the spark plug itself, using silicone to make sure water doesn't seep inside.

The final concern is air, which generally doesn't exist underwater. The answer is simple: a snorkel, just like a 4x4. They run extra tubing for the intake, crankcase vent, and the exhaust, and hang them above the water level. With that, they're good to go.

Since no one would loan them a pool they bought and set up their own, then lowered the bike in with a forklift, more precisely than their previous driving. After a couple of minor glitches, the bike does run, completely submerged except for the snorkel. In fact, not only does it run, but it also moves under its own power, first for some slow laps and then for some slow drifts. (Eurobeat intensifies.) They set a goal to run the bike underwater for a full ten minutes. Watch the video to see how it goes, and whether the bike is faster than an inflatable dinosaur, because reasons.

It seems to me that if I can rig up a similar system on my indestructible Kawasaki KLR 650, I should be able to go practically anywhere. 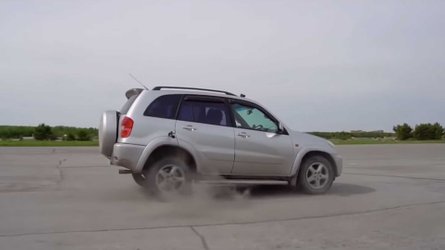 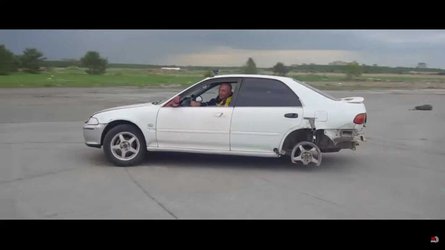