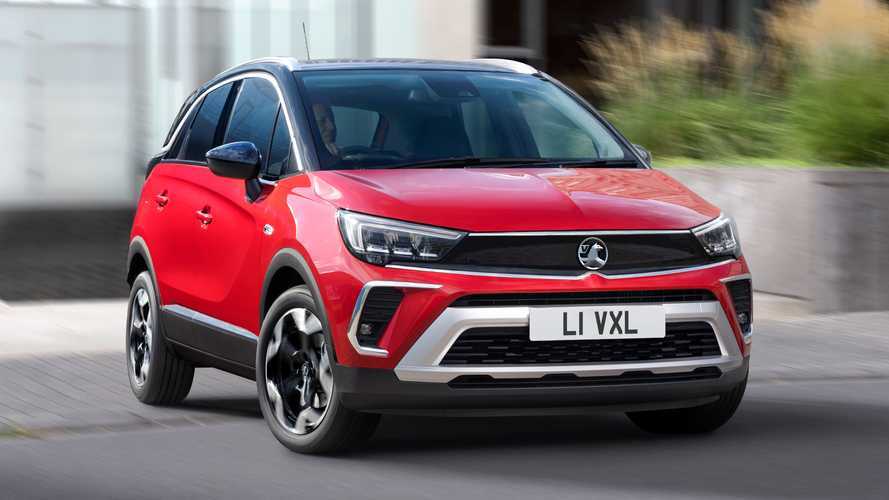 Vauxhall has released the first images of its new Crossland SUV, which previews the design language of the brand's next generation of cars.

The Crossland, which drops the 'X' from its name for this latest incarnation, features the same 'Vizor' front end as on the new Mokka, as well as LED lights and the brand's refreshed logo. At the rear there's new dark-tinted taillights and a new high-gloss black tailgate.

As well there's new front and rear skid plates, chrome door mouldings, and a choice of new r16- and 17-inch wheels, with the sporty SRi models coming with 17-inch alloys and a black roof with a red window accent.

Vauxhall Corsa-e to become top-selling EV in the UK?

On the inside there is an eight-inch touchscreen with Apple CarPlay and Android Auto integration. The four sates provide enhance comfort and support, with rear seats that feature a practical 60/40 split. They can also slide by up to 150mm, which increases boot space from 410 litres to 520 litres. Fold them down completely and there is 1,255 litres of boot space.

A range of high-tech safety features are included as standard, including Forward Collision Alert with Automatic Emergency Braking and Pedestrian Recognition, Driver Drowsiness Alert, and a Panoramic Rear View Camera with a 180-degree view.

Under the skin there's been chassis tweaks and new suspension all round, while the steering column has been switched to improve steering feel and handling. A range of petrol and diesel engines will be available too – a 1.2 turbo petrol with either 82 bhp or a 128 bhp, and a 1.5 diesel with either 108 bhp or 118 bhp

Deliveries of the new Crossland are expected to begin early next year  and order books are open now.