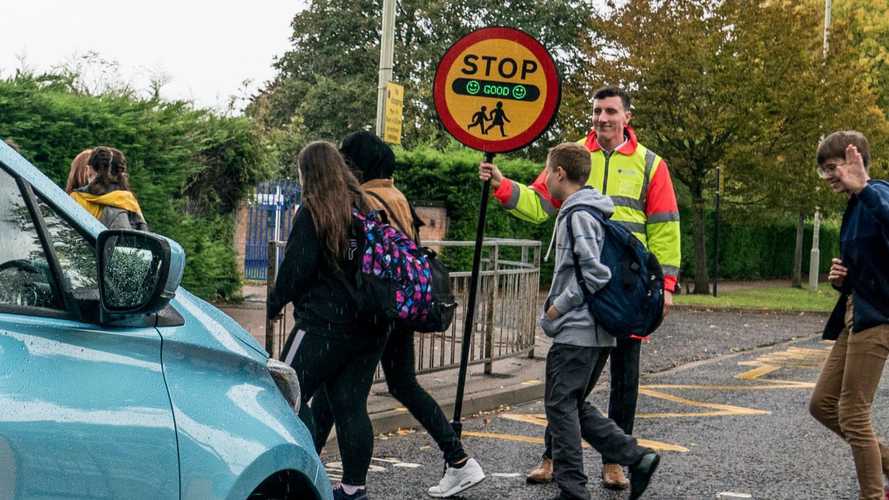 The invention shows drivers the air pollution at the school gates.

French car maker Renault has devised a high-tech school crossing lollipop intended to alert drivers to the air pollution found near schools. The invention was created as part of the company’s ‘Be Mindful, Don’t Idle’ campaign, urging motorists not to leave their engines running while waiting at the school gates.

According to Renault’s research, more than a quarter of school run parents (27 percent) admit to leaving their car running while stationary outside schools, despite the fact councils now have the power to crack down on such behaviour. Research from the British Lung Foundation and Asthma UK also reckons more than 8,500 schools and nurseries are located in areas with “dangerously high” levels of pollution.

The new school crossing lollipop is designed to alert drivers to this by showing a visual representation of the air quality in the immediate vicinity. The lollipop has a sensor that measures PM 2.5 particulate levels and a matrix display, allowing it to show whether air quality is good, okay or poor. The bands are determined based on guidance from the Department for the Environment, Food and Rural Affairs (DEFRA).

More on air quality in the UK:

Renault demonstrated the technology outside a school in Bedford, using a road that plays host to two schools and a college. The “highly accurate” sensor detected air pollution of between 2.5 μg per cubic metre and 14.7 μg per cubic metre between 07:00 and 07:45am – a low level by DEFRA’s definitions – but as the morning commute began to get busier, the figure rose. At 08:00, this figure quickly grew to 25.7 μg per cubic metre – higher than the legal limit – as the traffic increased.

Renault says an idling engine can pump out enough emissions to fill 150 party balloons every minute. It’s more common in urban areas, where the company’s study found more than half of people admit to doing it, than in rural communities. More than a quarter of those questioned (28 percent) said they leave their engines running for six to 10 minutes.

The French firm says it hopes initiatives such as the air quality lollipop will alert drivers to the problem of air pollution near schools. It wants drivers to reduce unnecessary emissions by switching engines off at the school gates.

“The lollipop has been the symbol of road safety for decades,” said Matt Shirley, Renault’s senior manager for electrification and new mobility. “Today, safety is not just about how to cross a road, it is also about how safe the air is that our children breathe going in and out of schools on a daily basis. The adoption of electric vehicles is a journey, but in the meantime, it’s important that we all do our bit and don’t leave our engines running unnecessarily.”