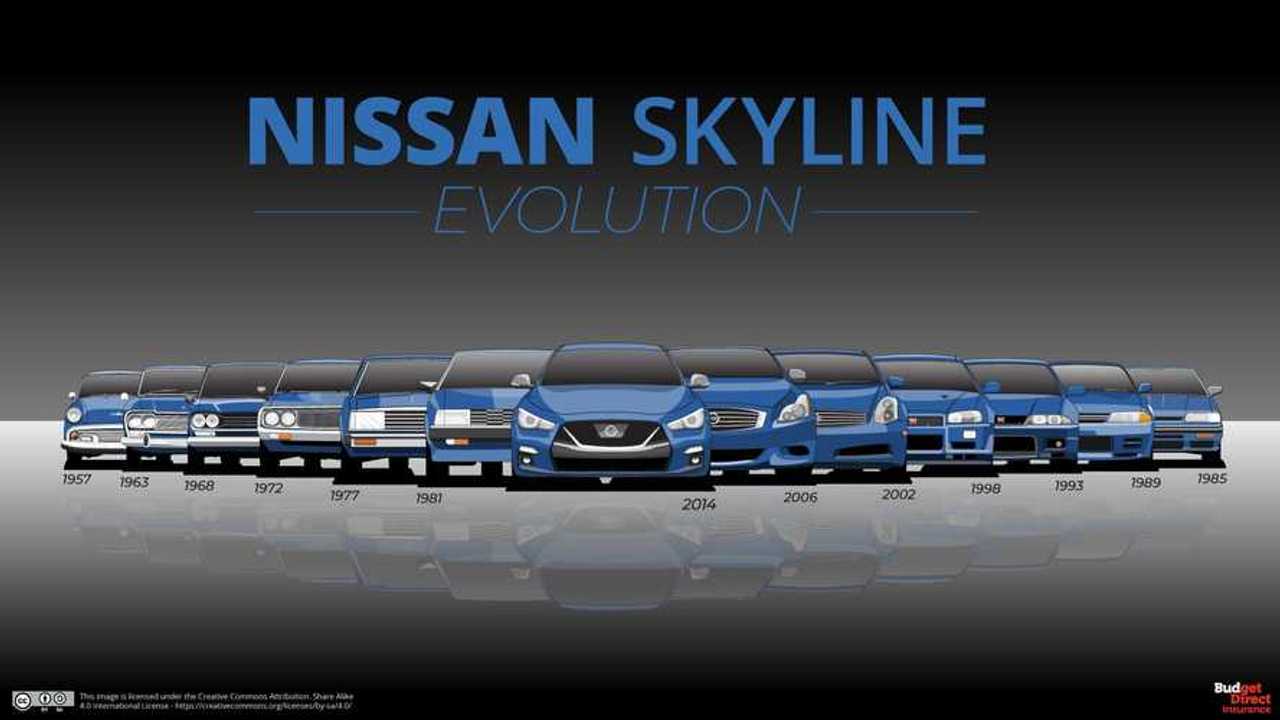 With over 60 years on the road, the Skyline has been through a lot.

There's a whole lot more to the Nissan Skyline than just the high-performance GT-R variants. The nameplate dates all the way back to 1957 and still exists today.

To get a glimpse of this long history, the folks from Budget Direct Car Insurance have prepared renderings showing off every generation of this important vehicle in Japanese automotive history.

The Skyline debuted in 1957, but at the time, it wasn't a Nissan. Instead, the Prince Motor Company introduced it as a luxury-oriented model. The design took clear inspiration from American cars from this period with a mix of mid-1950s Chevrolet and Ford styling cues.

Introduced in 1963, the second generation of the Prince Skyline wore more modern styling for the time by taking on a boxier, angular appearance. In addition to the four-door saloon, there was also an estate variant available. Following the merger of Nissan and Prince in 1966, the model became the Nissan Prince Skyline.

The third-gen Skyline was the first solely to wear the Nissan badge. It has also become famous because of the introduction of the GT-R in 1969. It sported a 2.0-litre inline-six making 160 bhp, which was an impressive output at the time given the engine's displacement. Later, a GT-R coupe arrived. Buyers were also able to get the standard Skyline as an estate.

In 1972, the fourth generation of the Skyline introduced a very different look to the model. It was sharper and featured a fastback-style roof for the coupe. There were also saloon and estate body styles that shared a prominent crease along the side that kinked upward towards the rear.

There was a GT-R variant of the fourth-gen Skyline, but they were incredibly rare. Nissan sold just 197 in Japan before ceasing production.

The fifth-generation Skyline arrived in 1977 wearing styling somewhat similar to the previous model but with a boxier overall appearance. There were four-door saloon, coupe, and estate variants.

There was no GT-R for this generation. Instead, the high-performance model was the GT-EX with a turbocharged 2.0-litre inline-six. It made 143 bhp (107 kW) and 152 pound-feet (206 Newton-metres) of torque.

The sixth-gen Skyline continued the move towards more angular styling when it arrived in 1981. In addition to the previous coupe, saloon, and estate variants, a five-door hatchback also joined the lineup for this generation.

The vehicle's performance saw a big upgrade at the top of the range with the introduction of the 2000 Turbo RS. It used a 2.0-litre turbocharged four-cylinder making 187 bhp (140 kW). At the time, this made the model the most powerful road-legal Skyline ever available. Later, an intercooled version pushed the output even higher to 202 bhp (151 kW).

Arriving in 1985, the seventh generation evolved the look of the previous model, and buyers were able to get it as a saloon, four-door hardtop, coupe, and estate. These were the first Skylines to use Nissan's much-lauded RB-series of inline-six engines.

The top performance variant for this generation was the GTS-R that debuted in 1987. It was a homologation special for competing in Group A Touring Car racing. The turbocharged RB20DET had an output of 207 bhp (154 kW).

In 1989, the eighth-generation Skyline brought a body with more curves to the vehicle, reversing a trend of increasingly sharp shapes that has been happening for years. Nissan also simplified the lineup by only offering a coupe and saloon.

The big news for the eighth-gen, also known as the R32, was the return of the GT-R name. It used the 2.6-litre RB26DETT twin-turbo inline-six with a claimed rating of 276 bhp (206 kW) under the agreement among Japanese automakers not to make vehicles producing more than this. The general belief was that the actual output was above this.

The R32 GT-R also proved to be very successful in motorsports. Australian press dubbed it Godzilla as a monster attacking from Japan capable of beating entries from Holden and Ford. The nickname stuck and proliferated around the globe for the GT-R.

Arriving in 1993, the ninth-gen, R33-designation Skyline continued the trend towards more shapely styling. The vehicle grew larger, which also caused the weight to increase. Saloon and coupe variants continued to be the available body styles, but in 1996, Nissan introduced the Stagea estate with a similar look to the 10th-gen Skyline but using mechanical parts from this model.

For the first time in decades, there was also a four-door GT-R available from Nissan's Autech division. Although, production was very limited.

Anyone who has played Gran Turismo is probably familiar with the 10th-generation, R34-designation Skyline. It began to give the vehicle sharper lines again after the progressively more rounded shapes of the two previous models. Again, there were coupe and saloon bodies available, in addition to the Stagea estate with a generally similar appearance.

The GT-R variant arrived in 1999. The RB26DETT with a claimed 276 bhp was still under the bonnet, but there were even more changes to the turbo and intercooler. Nissan vastly expanded the lineup. There was a new M-Spec variant with an added focus on luxury. There were also Nür variants with upgrades for maximising the lap time around the Nürburgring Nordschleife.

Arriving in 2001, the 11-generation Skyline probably looks familiar to American readers because it's largely identical to the Infiniti G35. It was available as a coupe and saloon; plus there was a Stagea estate without Skyline branding but riding on the same platform.

For the first time since the second-generation Skyline, there wasn't an inline-six engine available. Instead, this model used the VQ-family of V6 engines. It was available in 2.5-, 3.0-, and 3.5-litre displacements. Buyers were able to select rear- or all-wheel-drive layouts.

The 12th-gen Skyline joined the Nissan range in 2006, and like the previous model, it was largely identical to the contemporary Infiniti G37. The expected saloon and coupe variants were available. Plus, there was a new crossover variant, which was sold as the Infiniti EX and later Infiniti QX50 in the United States.

The VQ-family of engines continued to be available, but the range included 2.5-, 3.5-, and 3.7-litre V6 powerplants at various times during this generation.

Finally, we reach the current, 13th-generation of the Skyline from 2013. Like the previous two, it's largely similar to the Infiniti Q50 saloon. Japan doesn't get a Skyline version of the Infiniti Q60 coupe. A refresh in 2019 gave the Skyline a tweaked nose with a new take on Nissan's V-shaped grille that subtly evoked the GT-R.

The future of the Skyline is a mystery at this time given the business shakeup within the Renault-Nissan-Mitsubishi Alliance. A rumour suggests that Infiniti and Nissan might begin sharing more components, and Infiniti might even lose its rear-drive models. If this is the case, then a future Skyline might be front-wheel drive for the first time in over 60 years.

Everything you need to know about the Nissan Skyline