Nissan Re-Leaf is the ideal emergency EV for disaster areas* 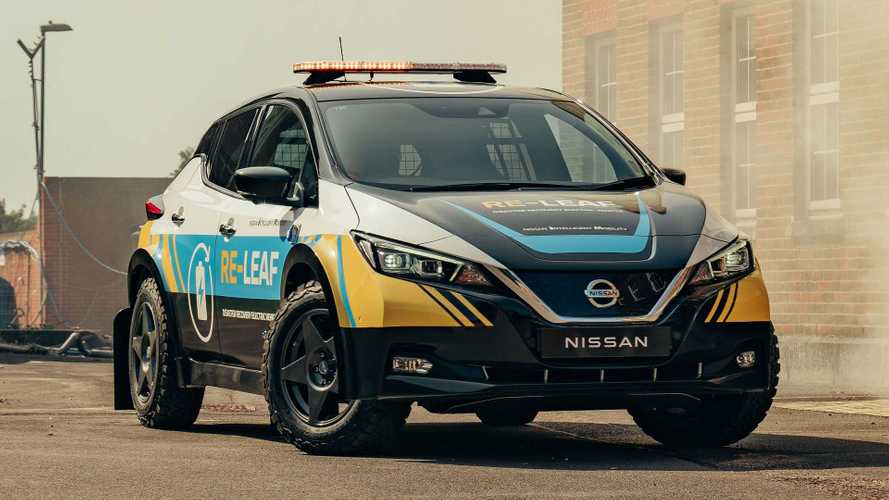 Nissan has revealed a prototype version of its Leaf electric hatchback designed for use by emergency services in disaster areas. Dubbed the Re-Leaf, the car has been modified to access areas in crisis after a natural disaster, then provide those areas with much-needed electrical power.

Externally, the car’s yellow-orange colour scheme is a nod to the ancient Greek word ‘electron’, which means ‘amber’, but formed the origin of the word ‘electricity’. That’s teamed with an electric blue colour, and an LED light bar with amber flashes.

The car also has jacked-up suspension with a 70 mm ride height increase, as well as a custom ‘sump guard’ to protect the underfloor. The track has been widened, too, with 90 mm more room between the front wheels and 130 mm more at the rear. Custom wheel arches also feature, along with mud flaps and all-terrain tyres and 17-inch motorsport wheels.

More on the Nissan Leaf:

Once those modifications have helped the vehicle access a disaster zone, the lithium-ion battery normally used to keep the motor running can provide a stable power plant for mains-powered devices. The system can deploy the car’s battery power at up to 230 volts, with three sockets on offer. Two external sockets are weatherproof C-form connectors, while there’s a domestic socket in the boot.

The luggage bay itself has also been heavily modified to create the Re-Leaf, with the rear seats removed and the floor levelled to ensure ease of access. A custom-built bulkhead cage separates the front seats from the cargo area, which is fitted with a pull-out desk, a 32-inch LED screen and a dedicated power supply, creating an “operational hub” to run communications and manage the emergency response.

“Through Nissan Intelligent Mobility, we’re constantly exploring ways that electric vehicles can enrich our lives, beyond just zero-emission transportation,” said Helen Perry, head of electric passenger cars and infrastructure at Nissan Europe. “Concepts like the Re-Leaf show the possible application of EVs in disaster management and demonstrate that smarter, cleaner technology can help save lives and provide greater resilience for the future.

“Electric vehicles are emerging as one of the technologies that can improve resilience in the power sector. By having thousands of EVs available on standby, either as disaster-support vehicles or plugged into the network through vehicle-to-grid (V2G), they’re uniquely capable of creating a virtual power plant to maintain a supply of energy during a major outage.”

Meanwhile Dan Cooke, operations director at Serve On, the UK's leading organisation providing emergency search and rescue in natural disasters around the world, said vehicles such as the Re-Leaf could make “a real difference” in disaster zones.

“When responding to a disaster, two critical factors that make all the difference are establishing communications, and staying hydrated,” he said. “Situational awareness saves lives and running a ‘command and control’ centre allows us to get the real picture of what’s happening whilst the infrastructure gets back online, but that needs power.

Seeing the Re-Leaf is really exciting, because we love exploring new ideas to see what’s possible. Looking back to previous scenarios we’ve dealt with, this technology could have made a real difference. For example being able to power multiple filtration devices to produce thousands of litres of drinking water – essential in our line of work.”