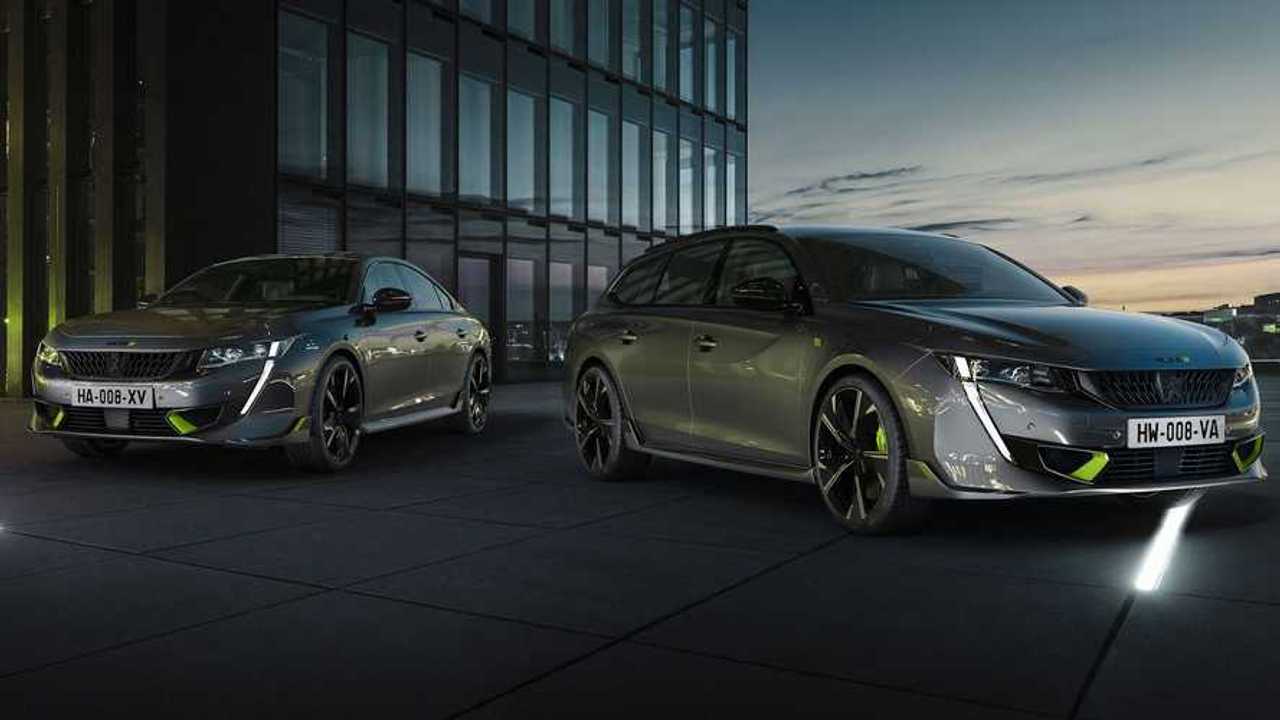 The 355-bhp saloon and estate duo arrives in production guise.

After tweaking the 3008 and 5008 crossovers, the French marque is unveiling today something far more exciting – its most powerful production car to date. Previewed in February 2019 by the Concept 508 Peugeot Sport Engineered, the road-going version is here as an electrified saloon and estate duo.

This hybrid arrangement enables the Peugeot Sport Engineered version of the stylish 508 to develop a combined 355 bhp (265 kW) and 384 lb-ft (520 Nm) sent to the wheels via an eight-speed automatic transmission. Consequently, you’re looking at the most powerful Peugeot road car ever, eclipsing the likes of the stunning RCZ R and 3008 GT Hybrid4 300. The 308 R Hybrid concept from 2015 with close to 500 bhp never made it as a production model, so it doesn’t count.

Power aside, the all-wheel-drive 508 PSE is seriously quick, needing only 5.2 seconds to hit 62 mph (100 km/h) regardless of the body style. Both are electronically capped at 155 mph (250 km/h) and will top out at 84 mph (135 km/h) when running solely on electric juice. Speaking of which, the 11.5-kWh battery pack has enough energy for an electric range of 26 miles (42 kilometres) per WLTP. Once you’re out of juice, a full recharge takes less than two hours from a 32-amp wallbox.

Some of you might be wondering about the car’s weight after adding all the hybrid-related hardware. The saloon tips the scales at 1,850 kilograms (4,078 pounds) while the estate is unsurprisingly a tad heavier, at 1,875 kg (4,134 lbs). Despite their heft, the cars need just three seconds to complete the 50-75 mph (80–120 km/h) task.

The Peugeot 508 PSE will arrive at dealers in the first half of next year. It’s expected to pave the way for a next-gen 308 PSE due likely in 2022 to take on the Volkswagen Golf R with more than 300 bhp.

PEUGEOT is paving the way for a new era in which the kilowatt is king, providing unprecedented power and torque for PEUGEOT production vehicles. PEUGEOT is guided by its heritage, passion and expertise, with a team of engineers and test drivers continually learning to master new technologies and conquer new territories.

With the launch of two new high-performance versions of the new PEUGEOT 508 Fastback and SW, PEUGEOT is unveiling the first model of its PEUGEOT SPORT ENGINEERED division. Delivering the perfect combination of sportiness and technology, PEUGEOT is combining renewed performance with responsible performance to create Neo-Performance.

The signature of this new family, with three Kryptonite claws, refers to PEUGEOT SPORT's new identity, to the light signatures of the production models, and draws inspiration from the brand's heritage with rear lights inspired by the PEUGEOT 504 Coupé.

New 508 PEUGEOT SPORT ENGINEERED is a technological showcase and truly represents the expertise of the PEUGEOT SPORT engineers who have proven their ability time and again in international competitions – such as the World Rally Championship, DAKAR, Pikes Peak and World Endurance Championship – and with the development of the 208 FE concept in 2013 (46g/km CO2, 0-62mph in 8.2s) and the 308 R Hybrid in 2015 (500hp, 720Nm, 0-62mph in 4.0s).

Coinciding with the launch of the new performance division, PEUGEOT is announcing its return to the World Endurance Championship in the Le Mans Hypercar category from 2022.

The new 508 PEUGEOT SPORT ENGINEERED is the most powerful production car ever built by PEUGEOT.

The powertrain produces 360hp and 520Nm of torque by combining an internal combustion engine and electrical energy. This combination makes it possible to achieve almost instantaneous responses and acceleration.

This level of performance is unprecedented for the PEUGEOT brand:

0-62mph in 5.2s
50-74mph in 3s
Maximum speed of 155mph (electronically limited)
The driving experience is at the very heart of PEUGEOT's DNA, which is why the PEUGEOT SPORT engineers have adapted the chassis of the PEUGEOT 508 to deliver enhanced performance and agility:

The new 508 PEUGEOT SPORT ENGINEERED produces 360hp thanks to the power of its combustion engine combined with its two electric motors, positioned at the front and rear. The four-wheel drive transmission ensures optimum traction in all weather conditions.

Five driving modes are available directly via the mode selector on the centre console:

Electric: For 100% electric driving in total silence, with a zero-emissions range of 26 miles under the WLTP protocol, providing access to green zones in urban areas and immediate responses from 0-86mph
Comfort: Hybrid mode with softened suspension for "high comfort" driving
Hybrid: Automatically selects combustion or electric power depending on the circumstances for optimised fuel efficiency
Sport: Delivers maximum power of 360hp for ultimate performance. In Sport mode, the interface incorporates a digital engine sound system, amplifying the sporty environment on board. This mode also tunes the steering, suspension and accelerator pedal mapping. The combustion engine ensures that the battery is charged for maximum power at all times
4WD: Provides maximum traction for slippery conditions
As for the hybrid motor, the new 508 PEUGEOT SPORT ENGINEERED has benefited from PEUGEOT's expertise with the recent launches of the PEUGEOT 3008 SUV HYBRID/HYBRID4 and PEUGEOT 508 HYBRID alongside the expertise at PEUGEOT SPORT with its experience of hybridisation in competition.

Recharging modes are flexible and adapted to day-to-day life:

New 508 PEUGEOT SPORT ENGINEERED has the same interior and boot volumes (above the floor) as the internal combustion versions thanks to the smart layout of the electric motors and battery.

The PEUGEOT SPORT ENGINEERED division has created a new type of virtuous performance: Neo-Performance. It is the perfect blend of sportiness and technology with low CO2 emissions: this high-performance version is approved according to the WLTP protocol at 46g/km – the equivalent of 139mpg fuel consumption.

New 508 PEUGEOT SPORT ENGINEERED embodies the very spirit of PEUGEOT's road handling know-how. The adjustments to its chassis have been fine-tuned by PEUGEOT SPORT engineers for heightened driving pleasure and include a specially-tuned steering set-up.

In addition to its four-wheel drive and for the highest level of safety, new 508 PEUGEOT SPORT ENGINEERED comes with all the driving aids available in the PEUGEOT 508 range, including: Night Vision, Adaptive Cruise Control with Stop & Go function, Lane Departure Warning System and Automatic Emergency Braking.

The PEUGEOT i-Cockpit® comes into its own here with a compact steering wheel featuring three Kryptonite claws, distinctive elements of the PEUGEOT SPORT ENGINEERED division, and a 100% digital Head-Up Display. The PEUGEOT i-Cockpit® graphic animations and the central 10-inch HD capacitive touchscreen have adopted the division's signature for an even more exclusive feel.

The upholstery of the "wrap-around" seats also has a distinctive look with a mix of Mistral Nappa Leather and Alcantara©, whilst the passenger compartment is decorated with double Tramontane Grey and Kryptonite stitching. The FOCAL® Hi-Fi audio system is supplied as standard, as are heat and massage functions on the driver’s seat.

The aerodynamic design of the bodywork is emphasised by the distinctive features, including: