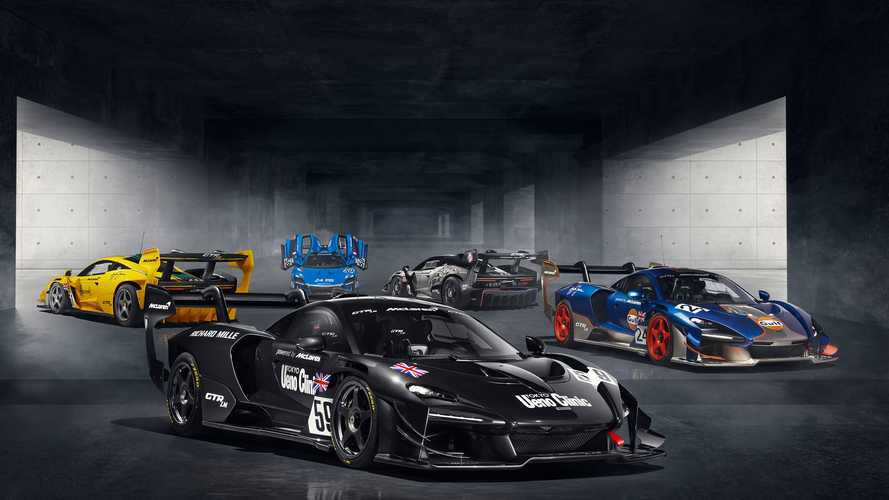 They're tributes to the five McLaren F1s that races at Le Mans in 1995.

Five McLaren Senna GTR LMs, inspired by the F1s that conquered Le Mans in the 1990s, have been commissioned by customers of the brand and produced by the McLaren Special Operations personalisation skunkworks.

McLaren finished first, third, fourth, fifth, and 13th in the 1995 24 Hours of Le Mans with a fleet of specially prepared F1 GTRs, just three years after the road car was introduced.

More on the McLaren Senna

The five Senna tributes, based on the Senna GTR model, feature a hand-painted livery that either matches, or is inspired by one of the cars that conquered Le Sarthe 25 years ago.

"The incredible cars of the McLaren Senna GTR LM collection are an exceptionally fitting way to celebrate the 25th anniversary of our Le Mans victory in 1995," said Mike Flewitt, CEO of McLaren Automotive.

"That achievement is widely acknowledged as one of the greatest endurance racing performances of all time, but for McLaren its importance was even greater because it demonstrated an immediate and undeniable connection between the racing DNA of our brand and the start of our road car journey."

The famous car's livery has been perfectly recreated by matching the colour for the body and wheels, and the F1's unique driving lamps have been recreated too after being specially commissioned by the GTR LM's owner.

Senna GTR LM 825/6 is a tribute to car #51, 'the Harrods car', which was driven by all-British trio of Andy Wallace, Derek Bell, and Justin Bell. The yellow machine looked to be on course for the win until it suffered a transmission glitch two hours from the finish.

The tribute car features a matching yellow and green livery, and is also the first McLaren since the F1 25 years ago to be adorned with the logo of London's iconic Harrods department store.

'The Gulf Car' was driven by Brazilian Maurizio Sandro Sala, Mark Blundell, and Ray Bellm to fourth at Le Mans in '95.

The recreation features the same famous Gulf Racing livery, with 'Gulf 95 Orange' pinstriping over the rear diffuser and the rear wing and matching orange wheels.

A Gulf Oil logo features on the bonnet and doors – a timely addition given the carmaker's recent new deal with the brand. The whole car is topped off with an Ayrton Senna signature on the rear quarter of the bodywork.

'The Jacadi car' was run by French-based customer team Giroix Racing and was driven by Fabien Giroix, Olivier Grouillard, and Jean-Denis Deletraz. It finished in fifth, one lap down on the Gulf car.

Le Mans Blue was used the recreate the livery on the Senna, complimented by a metallic shade of blue called 'Polaris' and the French flag.

The final F1 GTR tribute is a homage to 'The Cesar car’', which had the most intricate livery design of all the F1 GTRs at Le Mans in 1995. Sadly its result didn't match the sister cars, coming home in 13th.

The original was run by customer outfit Société BBA and was driven by all-French line-up of Jean-Luc Maury-Laribiere, Marc Sourd, and Hervé Poulin. Maury-Laribiere and Poulin were behind the car's 'art car' livery, and asked renowned artist Cesar Baldaccini to come up with the design, based on Poulin's collection of racing trophies.

This tribute car was the one that took longest to paint, and required a number of techniques, including airbrushing, to finish off. The job took so long that McLaren stopped recording the time taken to paint it.

All of the cars have since been delivered to their owners in the United States, Europe, and the UK. The exact cost of each car has been kept quiet by McLaren, but we imagine they would've cost a pretty penny.