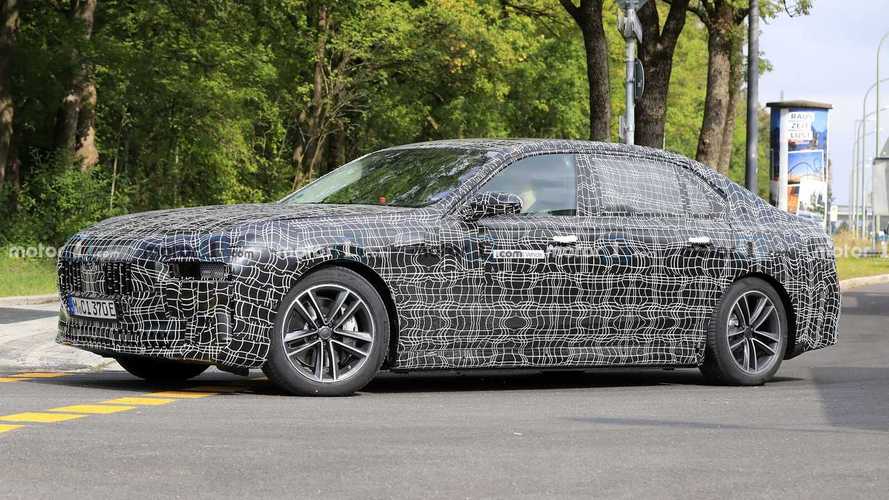 The flagship is still covered in camouflage.

When BMW reveals the next-generation 7 Series, the all-electric i7 will debut alongside it. However, while they’ll feature similar exteriors, their underpinnings will be radically different. The i7 will be part of the automaker’s electrification efforts set to kick off with the i4 and iNext next year.

New spy photos show development continues on the i7, which we don’t expect to arrive until 2022, and the test vehicle is still covered in swirly camouflage.

The latest batch of photos keeps much of the car hidden with plenty of cladding at the front obscuring the fascia. We expect the front to be packed with sensors for the safety technology the car will likely receive. The 7 Series competes against the Mercedes S-Class, which recently underwent a significant redesign focusing on tech and semis-self-driving capabilities. You can also spot rear-facing cameras on the front wings/fenders, which are just two of several sensors on the vehicle. Sadly, not much has changed from the last time we saw the i7 in its production form.

The new 7 Series should look similar to the i7, but the i7 will ride on a distinct platform that underpins the iNext and iX5 electric vehicles. Details about the car’s powertrain are elusive, though we expect the i7 to be the most potent offering. Rumours suggest the electric powertrain could produce as much as 650 bhp (484 kilowatts). That would outperform the 6.6-litre V12 in the M760i. We expect the car to offer up to 400 miles (644 kilometres) of range, at least in Europe.

BMW will likely reveal the i7 sometime next year before it goes on sale in 2022. It’ll be joined by the i5 that year as well, expanding the automaker's electrified lineup. It’s a new era for the automaker, and we’re excited to see where it leads.