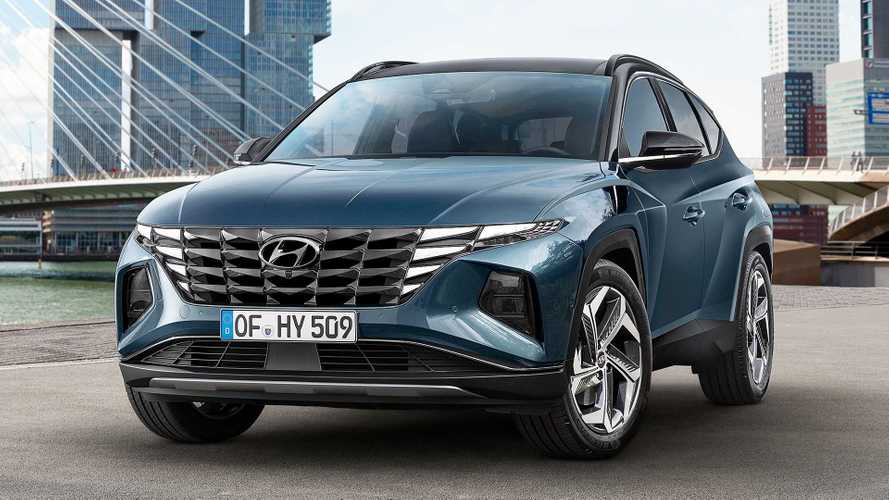 The hot-selling crossover gets a futuristic design, an optional hybrid, and a posh interior.

The Hyundai Tucson is a crucial component of the automaker’s success, particularly since it’s the best selling crossover (and best-selling vehicle overall in the UK) that the company sells. That’s why we’re more than a little surprised to see Hyundai take such massive risks in redesigning the 2021 Tucson, which boasts a sharp new design that takes the knife-edge looks of the North American 2021 Elantra to a new level.

The new Tucson’s advancements aren’t limited to styling and design, either. Like its compact-saloon sibling, the 2021 Hyundai Tucson will also come in both a hybrid and plug-in hybrid variant for the first time, adding power without sacrificing efficiency. What’s more, an N Line trim will proliferate to the Tucson sometime in the future. The Hyundai Tucson goes on sale in Korea this month as a 2021 model, but it won't arrive in Europe until the end of this year.

There won’t be any confusing the 2021 Tucson with its predecessor thanks to company-supplied descriptors like “parametric dynamics” and “kinetic jewel surface details.” Whatever the wording, the front grille receives an unusual triangular texture that’s mirrored right to left, taking some clear inspiration from the Elantra and Sonata. But unlike the saloons, the Tucson’s headlights are integrated into the grille opening, using LED elements camouflaged into the front end when not illuminated. Hyundai doesn’t have images of the vehicle with the lights off, but we think it must look rather aggressive when parked.

The side profile betrays clear Elantra intentions, with irregular rhombus and triangle shapes peppered throughout. There’s lots of positive and negative space as well, with bulging front and rear wheel arches and a long, jagged character line that juts out above the inset lower doors. The angular wheel arches and rocker panel appear in crossover-chic black plastic, all notches and creases. Meanwhile, the long and relatively flat roof gets done up in contrasting black, with an arching piece of chrome trim making the Tucson look lower and more rakish than it actually is.

Most prominent on the 2021 Tucson’s hindquarters are a set of blade-like taillights that might as well have been inspired by a farm plow. Suspended from a full-width LED bar, the quad taillights get broken down further by way of tiny, triangular elements that disappear when not illuminated. Lower rear bumper trim gets a unique diamond texture that’s seemingly hidden behind a faux rear skid plate. Hyundai cleaned up the appearance of the 2021 Tucson by hiding the rear window wiper under the roof spoiler, controversially moving the brand’s oval H badge up to the window glass.

Conventionally attractive the new Tucson is not, but there’s no denying its presence. Hyundai says the design emphasises the SUV’s distinct identity in a crowded segment, and there’s no denying that logic – no one will confuse this for anything but a Tucson.

The interior of the 2021 Tucson takes a slightly less aggressive tack, though it’s still clearly a modern Hyundai. The driver sits behind a tiller-shaped steering wheel, not unlike that of the Sonata, and two strips of silver trim surround both the driver and front passenger spaces, giving the cabin a twin-cockpit appearance. A flat dashboard sits atop a lower dash that curves down and away from the passengers, looking airy and open and likely alleviating claustrophobia; we’ll have to sit in it to verify that impression.

The Tucson also gets modernised significantly by way of a digital instrument cluster that sticks up from the dashboard rather than resting in a hooded binnacle. Another impressive feature is an available dual-screen infotainment system that offers a 10.3-inch display stacked atop a climate control panel with absolutely no physical buttons. The standard infotainment system is an 8.0-inch screen that includes Apple CarPlay and Android Auto integration and two-device Bluetooth connectivity.

Consider us skeptical on that upgraded flat-panel setup, because capacitive-touch controls are more distracting and harder to use while driving than conventional knobs and switches. Nevertheless, the digital instrument cluster and screen-heavy centre stack give the SUV’s new interior an attractive, contemporary appearance.

Other interior enhancements include car-to-home communication that can control smart appliances and lights while on the road, which would be useful when returning home on a dark night or a humid summer day, for example. Also new for 2021 is an available air quality monitoring system that keeps track of exterior pollution levels using a fine-dust sensor. It also tracks interior air quality and purifies the cabin as needed, while a lower-moisture evaporator helps keep the HVAC internals odor-free.

Hyundai 45 spied being quiet but fast on the Nurburgring

However, a 2021 Hyundai Tucson Hybrid will bundle a turbocharged 1.6-litre T-GDI inline-four with a 44.2 kW electric motor and a 1.49 kWh lithium-ion polymer battery, giving the electrified SUV an estimated 227 bhp (172 kW) and 258 lb-ft (350 Nm). That should give the Tucson some pretty expressive performance. The Hybrid will use a six-speed automatic transmission and will be available with two-wheel or four-wheel drive. Also on offer for 2021 will be a Tucson plug-in hybrid using the same turbo petrol four, with range and battery specifics still unknown, however, we know it produces an impressive 261 bhp.

Predictably, the Tucson will get both front-wheel drive and HTRAC all-wheel drive, and the latter has reportedly been improved with more driving modes in some markets. Building on the outgoing Tucson’s Eco, Comfort, Smart, and Sport settings, the 2021 model adds Mud, Sand, and Snow.

Also coming to the new SUV is an expanded list of drive-assist and active safety features. It’s not clear yet which will be standard or optional, but front collision monitoring and prevention with pedestrian detection, lane-keeping assistance, blind spot monitoring, and Hyundai Highway Driving Assist will be available on the 2021 Tucson. Since the outgoing model offers front collision prevention technology as an option, we’d expect the new one to make it standard.

The 2021 SUV is only a few notches on the ruler bigger than its predecessor in every metric. The new Tucson measures 2,680 mm between the axles, improving on the old Tuc’s 2,670 mm wheelbase only marginally. Ditto the new model’s 4,500 mm overall length, up 20 mm over the old Tucson. And a 15 mm increase in width brings the 2021 Tucson to 1,865 mm. A 1,650 mm height is the smallest increase, just 5 mm above its predecessor.

Pricing will be announced closer to the UK market launch towards the end of the year, the Hyundai Tucson should cost a bit more than the current SUV. Meanwhile, the plug-in hybrid version and N Line trim will arrive at the beginning of next year.