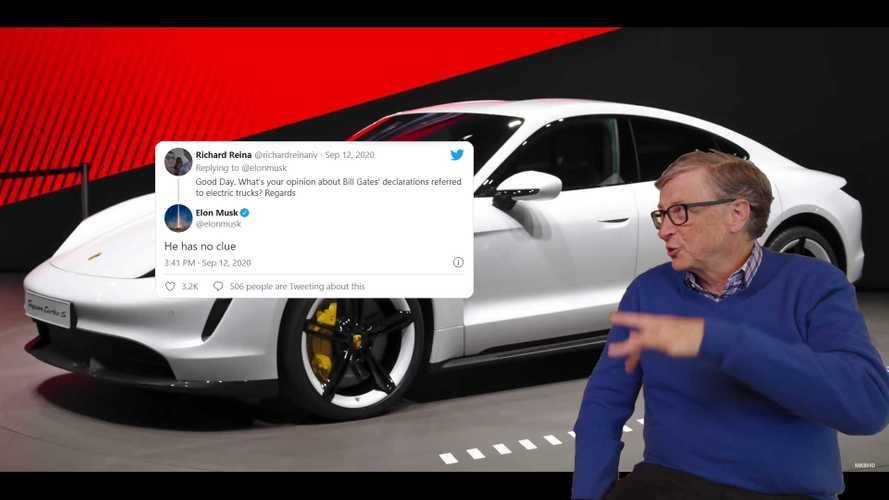 Gates said that “electric vehicles will probably never be a practical solution for things like 18-wheelers.”

Bill Gates talked about his investments at QuantumScape when he discussed carbon-neutral transportation. In that text, he mentioned he believes in electric cars (he has a Porsche Taycan), but not that battery-powered vehicles will be able to deal with high loads. It took a tweet for us to know what Elon Musk thinks about that.

What Bill Gates wrote at the GatesNotes on August 24 was this:

“Even with big breakthroughs in battery technology, electric vehicles will probably never be a practical solution for things like 18-wheelers, cargo ships, and passenger jets.”

On September 12, Richard Reina asked Elon Musk about that, and you can see the Tesla CEO answer below:

A direct reply – and a predictable one, coming from someone that bets on electric trucks. Unfortunately, it is not the one we would expect to beat the valid points Bill Gates made in his text. Not only him but also many more critics to the idea of a battery-powered semi-truck. According to all of them, a vehicle dedicated to transporting cargo cannot penalise how much load it can carry with the weight of its massive battery pack.

This is the main criticism of the idea, but there are also concerns about the charging downtime these vehicles would have to face. In case they have a fast-charging system able to prevent that, the fear is that these batteries would degrade much faster than if they were slowly charged.

The Tesla Battery Day will be held on September 22. If it does not get postponed, we expect Musk to explain what Gates is missing. It has to do with a technology that will make the Tesla Semi make perfect sense despite all the concerns already raised about it. We bet even the Microsoft founder is curious to see what Tesla will present to prove him wrong.