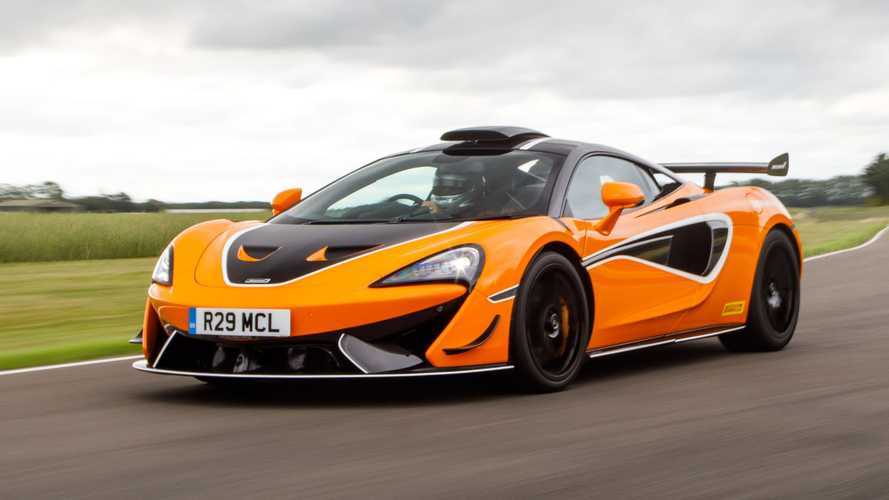 The new upgrade pack includes a host of "design and engineering upgrades".

McLaren is offering buyers of its limited-edition 620R supercar the chance to make their vehicle even more hardcore with a new R Pack. Devised by McLaren’s Special Operations division (MSO), the optional package incorporates a range of design and engineering upgrades to “intensify” driving experience.

Visually, the R Pack is marked out by the gloss-finish carbon-fibre roof scoop and carbon-fibre front fender louvres, as well as the gloss black exhaust tips. The roof scoop, which was inspired by the McLaren F1 Longtail and is said to “invigorate the driving experience with its active air induction sound”, can also house a camera to record “epic track sessions”.

There’s carbon-fibre inside, too, designed to complement the 620R’s already race-inspired cabin. But arguably the piece de resistance is the titanium SuperSports exhaust, which McLaren claims is up to five decibels louder than other exhaust options, as well as “more characterful” in its note.

These options are only available to 620R buyers in Europe, the Middle East and Africa, and will cost UK buyers a grand total of £25,000. McLaren says that’s “significantly less” than it would be were the options purchased individually, but it’s still more than the cost of a brand-new Ford Focus.

That said, it’s unlikely that 620R buyers care too much about the price. McLaren claims the vehicle, which is limited to just 225 examples, is the first car in its class to “offer true motorsport credentials in a fully road-legal package.

According to the British car maker, the 620R “evolves” the competition specification of the 570S GT4 racing car, making it road legal in the process. Behind the seats is the 570S GT4’s 3.8-litre twin-turbo V8 petrol engine, tuned to produce 610 bhp and 457 lb-ft of torque. That allows this road-legal rocket to get from a standstill to 62 mph in 2.9 seconds. Just over five seconds later, it can hit 124 mph.

That power is backed up by a range of aerodynamic and chassis components also shared with the 570S GT4. Carbon ceramic brakes, centre-locking wheels and manually adjustable GT4 dampers are all standard, along with bodywork that produces 185 kg of downforce at 155 mph. Pirelli P Zero Trofeo R tyres are standard, but customers can buy Pirelli slick tyres for track use.