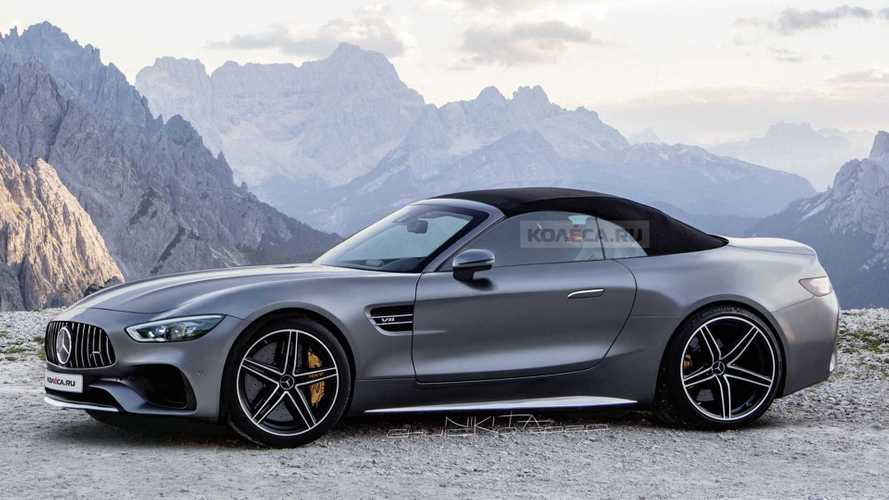 The AMG-developed roadster will be unveiled in 2021.

Spending money, time, and effort into developing a new roadster in this day and age seems like a waste of resources, but Mercedes can’t simply just give up on the iconic Sport Leicht. The three-pointed star is streamlining its portfolio by phasing out the SLC and S-Class Convertible while giving the SL another shot.

This time around, the roadster is being developed by AMG and will revert to a fabric roof it last had during the R129 generation phased out roughly two decades ago. Even though it won’t be introduced until sometime next year, the all-new SL has already been teased by Mercedes courtesy of images showing camouflaged prototypes undergoing road testing.

Based on those official pictures, our Russian pals at Kolesa have digitally removed the disguise in an attempt to preview the revamped SL. It’s been envisioned with the Panamericana grille and an integrated rear spoiler as suggested by the teaser pics, which also showed quad exhaust tips. Those pop-out electric door handles are more along the lines of wishful thinking on the artist’s part since the real thing seemed to have conventional handles. Mercedes could take the S-Class W223 approach by selling the new roadster with both traditional and electrically operated handles, but that remains to be seen.

While some folks will certainly be sad to see the hardtop go, a metal roof is quite the opposite of what the SL (Super Light) stands for – it’s heavy and cumbersome. A fabric top is not only significantly lighter, but it also takes up less space when folded, thus freeing up more cargo capacity to enhance the roadster’s GT nature. An optional removable hardtop like the SL had back in the day would be ideal, but it might not be worth the financial and development effort given the car isn’t projected to be a big seller.

The adjacent rendering proposes a V8 powertrain as denoted by the badge on the side vents, but we’re also expecting the base model to use Daimler’s silky smooth inline-six. The range-topping variant is rumoured to carry the SL73e badge and combine a twin-turbo V8 4.0-litre mill with an electric motor good for approximately 800 bhp. Don’t hold your breath for the return of the SL65 as Mercedes has made it clear only Maybach will get the twin-turbo 6.0-litre V12, complete with AWD for the first time.

The new SL is believed to be in development alongside the next-generation AMG GT Coupe, with both reportedly being engineered as direct replacements for the ill-fated S-Class Coupe and Convertible. With the roadster coming out in 2021, its fixed-roof sibling shouldn’t be too far behind.

Check out the Mercedes SL interior's evolution across all 6 generations