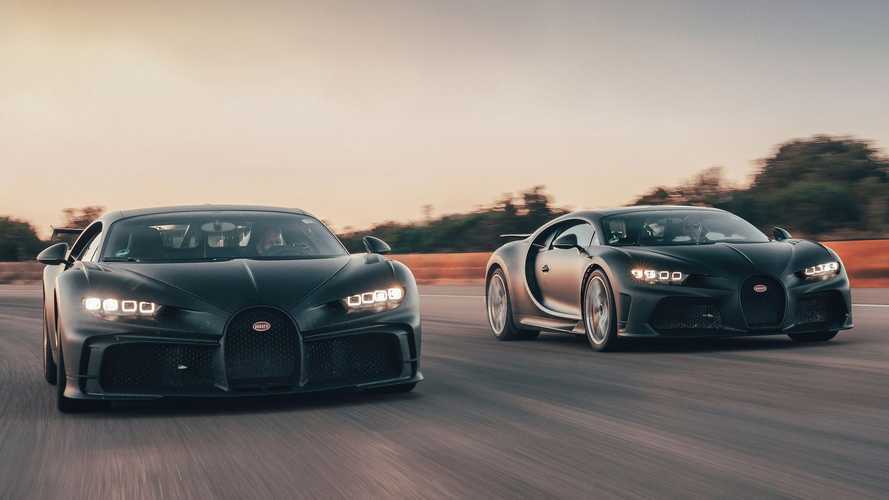 The world's most impressive vehicle testing facility meets the best Bugatti has to offer.

The Nardo Proving Grounds in Apulia, Italy is home to some of the most impressive expanses of track on earth offering cars the option to take on the massive 12.6 km long highspeed test loop or the or the handling course house inside the four-kilometre diameter test loop. This wide range of testing opportunity is the perfect place for Bugatti to test two of their latest additions to the Chiron lineup.

From opposite ends of the Bugatti spectrum, we have the Chiron Super Sport 300+, which is built for absolute speed, and the Chiron Pur Sport, which is built for handling and agility. Bugatti sent four of each Chiron variant and a team of 37 Bugatti staff members who spent four weeks testing these cars to their limit. The amount of data gathered is staggering. Take for example the nine gigabytes of data gathered from making small tweaks to the Chiron’s ECU which is just the tip of the iceberg.

Unique Bugatti among rarities at this week's Concours of Elegance

When it comes to engineering hypercars that are meant to improve the performance of an already impressive hypercar, there is quite a lot of fine-tuning required. Bugatti engineers spent a great deal of time tweaking and monitoring the thermodynamics of critical components. Namely, the engine and transmission in the Chiron Super Sport 300+ which needs to be stable and reliable up to Ludacris speeds.

This level of development and obsession is exactly what Bugatti customers are paying for when they shell out millions of dollars to own an exclusive hypercar. These highly focused versions of the Bugatti Chiron show how flexible the Chiron platform is and what can be achieved with engineering focus on a singular goal. We look forward to seeing both production cars in action to showcase this massive engineering achievement.

The circular track, 12.6 kilometers long and four kilometers in diameter. The outer edge tilts towards the centre by more than 12 degrees – ideal for top speeds. The Nardò proving ground in Apulia, Italy, is considered the fastest vehicle circuit in the world – making it the ideal test site for the Bugatti Chiron Pur Sport1 and Chiron Super Sport 300+* hyper sports cars. The circuit theoretically enables speeds over 400 km/h and test drivers need not steer up to 240 km/h. Due to its low parabolic profile, the centrifugal force is compensated and drivers have the sensation of driving in a straight lane.
The infield of the high-speed circular track accommodates a 6.2-kilometre handling course – designed for adaptations to the vehicles’ dynamics and suspension. 70 kilometres of track are available for extensive testing across an area covering over 700 hectares. For the first time, the two extremes of Bugatti’s performance spectrum are meeting at a test track.

“The Nardò test track with the high-speed circular track and the handling track is ideal for us. Here we can extensively enhance the Chiron Pur Sport and Chiron Super Sport 300+ at different speeds – and at high temperatures,” says Stefan Ellrott, Head of Development at Bugatti. “Our hyper sports cars must not only operate flawlessly at moderate speeds and temperatures, but also at speeds beyond 300 km/h, as well as in cold and hot conditions.”

Over 20,000 test kilometres
Bugatti goes to great efforts for this: 37 staff members from several departments are developing eight Bugatti vehicles in Italy over a period of four weeks, from sunrise to sunset. All in all, four Chiron Super Sport 300+ and four Chiron Pur Sport pre-series vehicles are covering a total of over 20,000 kilometres. Engineers record data with their computers on every lap, sometimes only modifying minor details to check the result on the next lap. Nine gigabytes of data were generated for tuning the engine control unit alone, which was then evaluated after the tests. This is a job that requires a high level of concentration from all staff members. “The time frame is tight, which is why we are using every minute to be able to carry out our driving tests around the track,” explains Christian Mohr, Bugatti engine test engineer.

In addition to the Pur Sport, the development phase of the Chiron Super Sport 300+, the new longitudinal dynamics force within the Chiron2family, is also in full swing. Derived from the record-breaking vehicle, which was the first series-production car to reach speeds over 300 miles per hour, at 304.773 mph (490.484 km/h), in summer 2019, the engineers are developing a very fast special edition limited to just 30 vehicles. Bugatti only electronically limits its top speed at 440 km/h.

Visually speaking, the fastest series-production Bugatti ever built differs from the Chiron and Chiron Pur Sport with elements such as an extended and aerodynamically optimised body designed for high-speed driving. The elongated rear, known as the longtail, allows the laminar flow to pass over the vehicle for longer and thus significantly reducing the aerodynamic stall. Air curtains on the side next to the air intakes direct the air from the front to the rear to force it along the side of the vehicle. Nine outlet air slots on each wing prevent air pressure from building up in the wheel arches as a result of the wheels’ rotation. Thanks to the modified body, the vehicle reacts differently at high speeds compared with previous Chiron models.