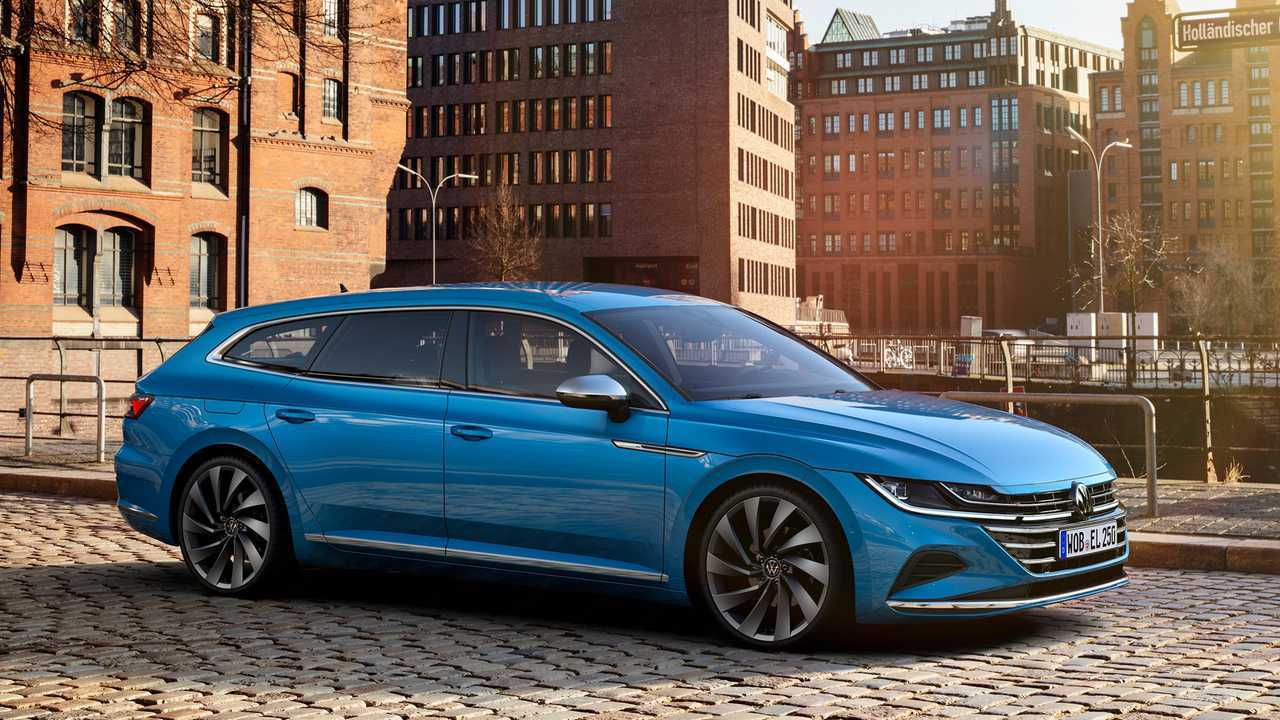 You now get a choice of fastback and Shooting Brake models.

Volkswagen’s new Arteon fastback and Shooting Brake models are now available to order in the UK, with prices starting at £35,435. The flagship VW has been updated for 2021 with small exterior tweaks and new powertrains, including plug-in hybrid and high-performance R versions.

The new model has also been bestowed with a new SE Nav equipment level, which replaces the old entry-level SE model. That version comes with a digital instrument cluster as standard, as well as three-zone climate control, front and rear parking sensors, and an eight-inch touchscreen navigation system.

The whole car rides on 17-inch ‘Cardiff’ alloy wheels, while LEDs fill the light clusters at the front and rear. Inside, there’s an eight-speaker surround sound system and a driver’s seat with six-way electric adjustment.

More on the new VW Arteon:

Moving up to the Elegance trim gets you larger 18-inch alloy wheels and keyless entry, plusa rear-view camera and Travel Assist, a combination of adaptive cruise control and lane-keeping assistance that’s designed to reduce driver workload. The Elegance also gets a steering wheel with touch controls, heated seats and a selection of driving modes that tweak the car’s behaviour depending on the driver’s preference.

The Arteon R-Line, meanwhile, is the sportier option, featuring 19-inch ‘Montevideo’ alloys as standard, along with new trapezoidal exhaust tips and a redesigned R-Line body kit. A sunroof is standard on all R-Line cars, although the Shooting Brake ups the ante with a larger panoramic sunroof. Tinted glass is standard on both body shapes.

Under the bonnet, the Arteon comes with a choice of petrol and diesel engines. The entry-level SE Nav, which is currently only offered in fastback guise, comes with a 148 bhp 2-litre diesel engine, while the Elegance and R-Line get petrol power as standard. That comes in the shape of a 2-litre unit with 188 bhp, although the 148 bhp 2-litre diesel is still available as an option.

Eventually, though, the Arteon and Arteon Shooting Brake will be offered with a choice of seven powertrains, including a 1.5-litre, 148 bhp petrol engine and the eHybrid plug-in hybrid model. The 315 bhp, four-wheel-drive Arteon R (below) will also join the range later.

“The new Arteon and Arteon Shooting Brake caused quite a stir when they were unveiled earlier this year,” said Lisa Hartley, Arteon product manager at Volkswagen UK. “The media and public alike were captivated by the models’ handsome design, range of powertrains – including plug-in eHybrid and R models – and elegant road presence.

“The Arteon is now improved with additional equipment and a subtly enhanced design, while the same practicality and overall package that won it awards in its outgoing form remain. With the relatively small premium for the attractive Shooting Brake over the fastback, we expect to see it make up the majority of sales in the UK.”