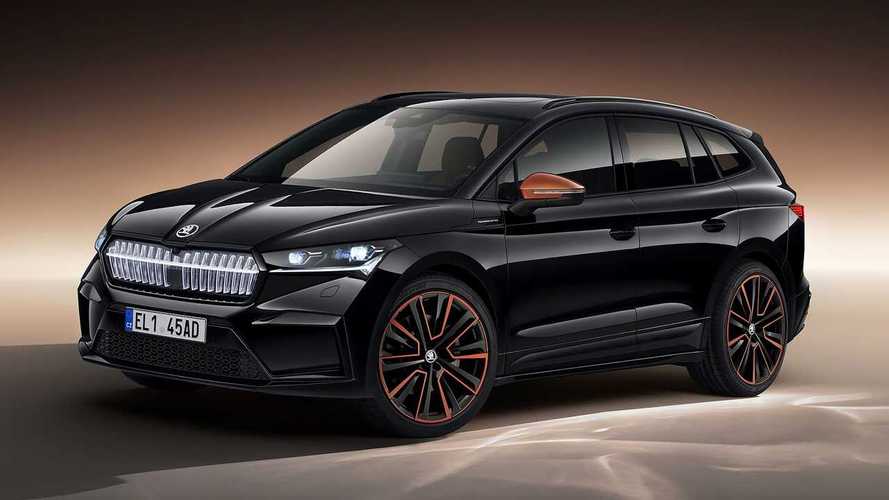 Fun fact: the base model rides on 18-inch steel wheels.

After a rather exhausting teaser campaign, Skoda’s first electric SUV is finally here. Essentially a sister model of the upcoming Volkswagen ID.4, the family-oriented EV is the brand’s first model to ride on the MEB platform dedicated exclusively to zero-emissions vehicles. It serves as the company’s second electric model after the Citigoe iV and aims to capitalise on the crossover boom.

Although the design inside and out doesn’t come as a surprise what with all the images released in previous weeks, the Enyaq iV does have a feature we weren’t expecting – an illuminated grille. Standard on the performance RS version and the limited-run Founders Edition, the light-up grille has 130 LEDs and takes after the 2019 Vision iV concept that previewed the production model.

Available with rear- or all-wheel drive, the Skoda Enyaq has been developed with a choice of two battery sizes (62 kWh, 82 kWh for UK market) and two power outputs (177 bhp, 201 bhp). Range varies depending on the battery pack and whether it’s the RWD or AWD model, but even the base 62 kWh model can travel 242 miles (389 kilometres) between charges. Should you want the longest range available, the single-motor, rear-drive Enyaq iV with the 82-kWh battery pack will cover up to 316 miles (510 km) per WLTP.

To achieve the generous range, Skoda did more than just install a large battery. The sleek shape of the SUV corresponds to a low drag coefficient of 0.27 while the low rolling resistance tyres also help with efficiency. An optional heat pump for the AC cuts down the amount of energy used by the battery to further improve range.

Once you’re out of juice, the biggest of the three batteries can be recharged from 5 to 80 percent in 38 minutes courtesy of fast-charging capabilities of up to 125 kW. Using an AC wallbox of up to 11 kW will “fill up” the battery anywhere between six to eight hours depending on the battery’s size.

Interestingly, the entry-level model comes with 18-inch steel wheels, which is practically unheard of in this day and age in the SUV segment. All the other Enyaq iV versions have alloys up to 21 inches in size and in a variety of designs and colours. The fancy Founders Edition capped at 1,895 units to signal the company’s inception 125 years ago has the biggest wheels available along with an assortment of other cosmetic tweaks.

In many ways, the dashboard design is similar to what you’ll find in the latest Octavia or Scala, but the 13-inch touchscreen is exclusive to the Enyaq iV. The electric SUV is also the first Skoda to boast a head-up display with augmented reality tech and also the first to support remote-controlled parking. Speaking of tech, LED headlights and taillights come as standard while the matrix LED headlights are available at an additional cost.

It wouldn't be a proper Skoda without a generous array of Simply Clever goodies, and the Enyaq iV is packed with a lot of neat features. From the electrically retractable tow bar to umbrellas in the front doors, the electric SUV has all sorts of convenient items. The electrically operated tailgate provides access to an adjustable false trunk floor for greater cargo versatility, while the ice scraper on the inside of the tailgate has a built-in tire tread depth gauge.

Skoda is already accepting preorders for the Enyaq iV in all trim levels, but customer deliveries of the Founders Edition honouring the company's founding members Václav Laurin and Václav Klement won't start until later in 2021.