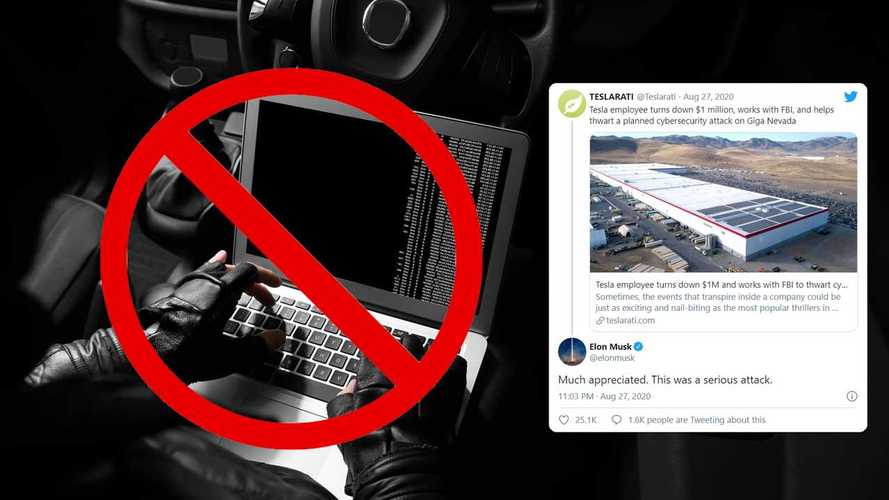 DriveTeslaCanada.ca got it right: “This was a serious attack.”

When we told you about a Russian hacker that was arrested by the FBI last August 22, we suspected he and his group were planning to attack Tesla. That was what DriveTeslaCanada.ca brought up, and it was feasible. Sadly, there was nothing in the FBI document to confirm that. It was not necessary to wait long: Elon Musk did that on Twitter on August 27, after Teslarati also wrote about the story.

You can see both Teslarati's tweet and Elon Musk's response below.

Musk probably meant that Tesla's employee actions were "much appreciated," but that sparked dozens of questions on the comments regarding how this employee was rewarded. The CEO did not answer them, but we hope CHS1 – as the FBI referred to him – has more to celebrate than just his integrity.

In case you do not know what happened, a Russian hacker called Egor Igorevich Kriuchkov travelled to the US to meet with CHS1 that he knew back in 2016. This employee is probably also Russian since the FBI mentions he did not ask for US citizenship as a reward for his services.

After pretending to try to enforce friendship bounds, he asked to talk "business" with CHS1. Said business was a "special project" that involved installing ransomware into Tesla's computer network. That would give CHS1 $500,000.

CHS1 went to the FBI and was convinced to collaborate in arresting Kriuchkov. He then asked for advanced payment and $1 million to do that. The negotiations went on for days. CHS1 eventually got more names for the FBI, including Sasha Skarobogatov. We are not sure this is a real name, but it has already appeared in other data ransom cases.

Hacker gets Tesla on Autopilot to stop itself at red light

The FBI got in touch with Kriuchkov and eventually arrested him at the airport when he was preparing to fly back to Russia. Now the feds must be after the other members of the gang, who are probably targeting other companies at this very moment.

Although loyalty is priceless, it deserves to be rewarded. Kriuchkov mentioned other companies attacked by his group and that their accomplices still work there. Tesla will not have that to haunt its sleep. The attacked companies will until all members of this gang go to jail.