Is this our first look at the next-generation Porsche 911 GT3 RS? Two photos from janerikslooten on Instagram for CarPix is all we have to go on, but there sure is compelling evidence that we’re looking at Porsche’s hardcore track machine. And it’s not simply because of that absolutely bonkers rear wing.

We’ve seen GT3 test cars quite often in various stages of camouflage, but it all amounts to a wrap concealing small details. Those cars have a wing similar to the ginormous spoiler here, but they are a single-wing design. This dual-wing is larger in all aspects, and it uses a slightly different mount from the other test cars caught on camera.

Looking lower, the rear fascia with its centre-exit exhaust is also slightly different from previous GT3 sightings. The front view clearly shows the wheel arch vents along with other vents on the bonnet, and the front splitter looks slightly larger. Below is a photo gallery showing the standard GT3 for comparison.

Could Porsche simply be testing another wing design, or even testing a new wing for its motorsports efforts? Possibly, but the vents and extra bodywork around the wheel arches and rocker panels are a dead giveaway that this is actually a GT3 RS. 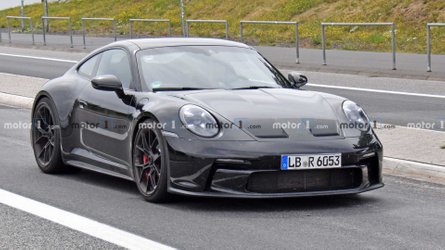 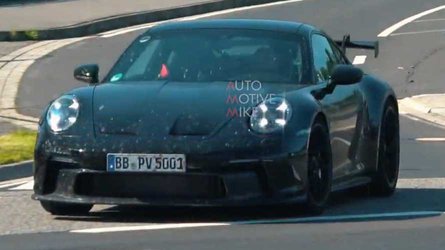 Porsche 911 GT3 spied making a glorious noise on the Nurburgring

Thus far, we’ve spied two versions of the GT3. The standard model is identifiable by its large wing, while the GT3 Touring takes a milder approach with a smaller, electrically deployable spoiler. Both cars are expected to pack an upgraded version of Porsche’s glorious 4.0-litre naturally aspirated flat-six, which could generate upwards of 550 bhp (410 kilowatts). That’s a mind-numbing figure for such a small mill with no turbos, and the GT3 RS would likely offer the same engine with the track-focused aero package to make it an absolute road-racing demon.