The best of both worlds.

Approximately 24 hours ago, we shared an interesting spy video showing a rather weird Rolls-Royce test prototype. The mystery test car had lots of camouflage but it was easily recognisable as an estate of some sort. That doesn’t necessarily mean Rolls is working on a shooting brake but that’s one possible option.

Apparently, the spy video inspired artist Wagen Volk to create a unique one-off based on the Wraith. It’s essentially a Wraith Shooting Brake with a lot of inspiration from the Cullinan. We have to admit it’s one of the most professional renderings we’ve seen in recent weeks.

If you take a closer look at the rear end and compare it with the test prototype from yesterday, you’ll notice there’s a striking resemblance between the two. The shape of the taillights is almost a 100-percent match and even the small spoiler attached to the rear hatch looks very similar. Size-wise, the rendering is also very close to the real-life prototype. 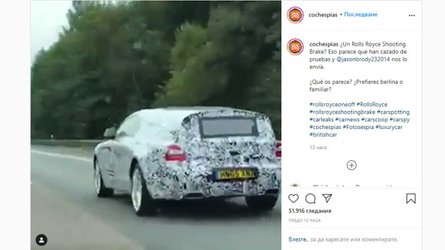 The larger wheels and plastic cladding around the wheel arches and side skirts give this virtual vehicle an adventure-ready stance that, again, strongly reminds us of the Cullinan. However, from the line that separates the doors and the side windows above, it is pretty much a traditional shooting brake with a sloped roofline and rear windows. One feature we especially like is the frameless design of the front door windows.

We have no idea whether Rolls is actually developing a one-off model or the test prototype was simply used as a testbed. However, if the British company has something close to this rendering in mind, we are all in. For us, it's the best of both worlds - practicality and luxury.