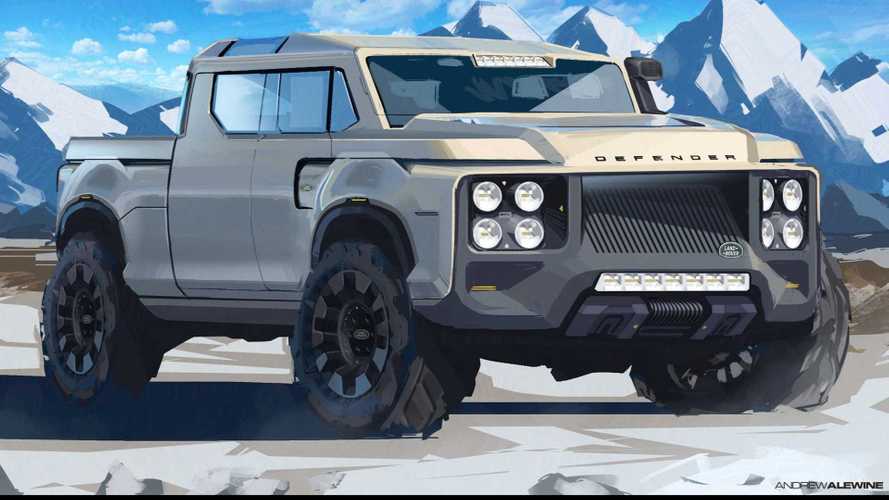 The artist imagined a less 'cute' look for the new Defender.

When thinking of a full-sized American pickup your mind probably goes to a product from the Big Three like the Chevrolet Silverado, Ford F-150, or Ram 1500. There are a few competitors from foreign brands, though, like the Nissan Titan and Toyota Tundra. In his free time, designer Andrew Alewine imagined a British entry in this segment by rendering a much bigger Land Rover Defender truck.

Alewine's design maintains the Defender's trademark design cues like having chiselled lines with a boxy, upright stance. He puts his own spin on the styling, though.

"[I've] always been a fan of the defender, but with the new cute style of the current Defender I wanted something more of my taste as to what I thought a bad ass defender should really be," Alewine wrote on his Behance page for this rendering.

In front, the classic circular headlights with smaller lamps next to them become four, huge lights on each side of the nose. The design also includes an LED bar in the lower fascia above a winch, and there are even more LEDs at the top of the windscreen.

Alewine doesn't specify the powertrain his Defender pickup would use, but the snorkel on the driver's side suggests that it's a combustion engine. The inward angled grille might limit the space in the engine bay for fitting the mill, though.

Land Rover Defender V8 is one fast brick at the Nürburgring

A new Land Rover Defender pickup isn't happening, especially not a bigger one that's the size of this rendering. The company believes the standard crossover offers plenty of cargo space and doesn't want to compete in the commercial truck market. There's a version of the hardtop model on the way for business customers, though.