We haven't seen that many Tesla Model Y racing videos. Perhaps that's about to change.

The Fast Lane Car showed off the Tesla Model Y's drag-racing prowess last week with a series of runs against a Dodge Challenger Hellcat Redeye. The results were interesting for sure. Now, TFL is back with another drag race night in Colorado USA. This time, it's a more realistic matchup, with two all-wheel-drive performance SUVs (or crossovers if you like that term better).

TFL Car brings out the 2021 Mercedes-AMG GLS 63 to challenge the Tesla Model Y. It features a twin-turbo 4.0-litre V8 engine that cranks out 603 bhp and 627 pound-feet of torque. Due in part to the help of its 48-volt mild-hybrid system, it'll rocket you from zero to 60 mph in about 4 seconds. This Mercedes will cost you about £60,000 more than the Tesla crossover when it arrives in the UK.

The all-electric Tesla Model Y Performance features two motors and a large battery pack. According to Tesla, it can hit 60 mph from a standstill in just 3.5 seconds. The Performance version starts at $59,990 (£45,000 est.) and now comes standard with the Performance Upgrades package, which boosts the Model Y's top speed from 135 to 155 mph and adds 21-inch wheels, performance brakes, and a lowered suspension. 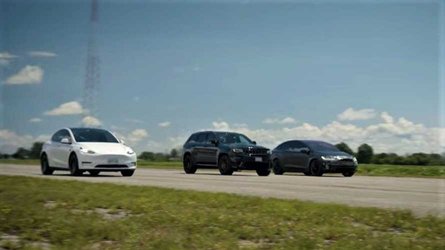 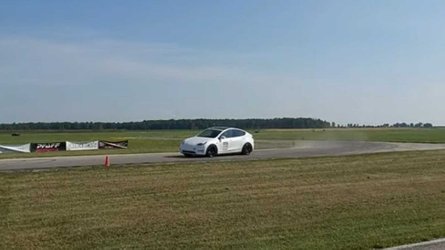 TFL talks about how petrol-car drivers modify their cars and do things like stripping out the interior to make them faster. They also have to practice their launch and driving skills, since it's not easy to achieve consistency with a petrol-powered car. In the Tesla, however, there's not really much skill involved, and mods are uncommon. The only important piece is to make sure the battery is at over a 70-percent state of charge.