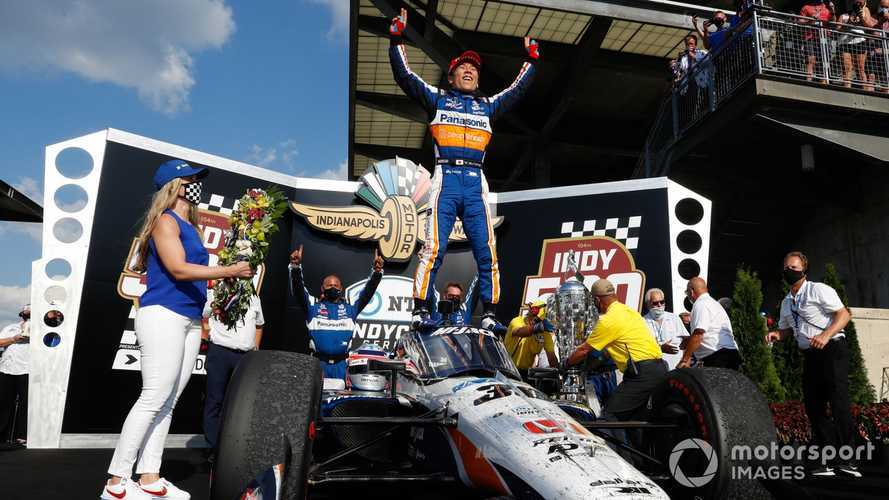 Dixon burst into the lead at the start around the outside of Marco Andretti’s Andretti Herta Autosport machine with Sato sending his Rahal Letterman Lanigan car up into second along the backstraight. Behind, Ryan Hunter-Reay grabbed fourth ahead of Rinus VeeKay, chased by James Hinchcliffe (Andretti), Alexander Rossi (Andretti), Spencer Pigot (Citrone Buhl Autosport with RLL), Marcus Ericssson (Ganassi) and Graham Rahal (RLL).

An early casualty was Ed Carpenter who pulled his car into the pits at the end of the opening lap, believing Zach Veach had sent him into the wall. No action was taken by IndyCar officials.

By Lap 4, Hunter-Reay had moved past Andretti and Sato to claim second, while VeeKay in fifth was working hard to hold off Hinchcliffe.

The first yellow of the day flew on Lap 6, when James Davison’s Dale Coyne Racing with RWR/Byrd/Belardi car suffered a front-right brake issue that caused the wheel to catch light and pop out on the back straight. The Australian brought the car to a halt near pit entry and stopped and got out without harm.

The race restarted on Lap 12, and Hinchcliffe after a struggle got around VeeKay to claim fifth and Rossi too would pass the ECR-Chevy. Hinchcliffe maintained his momentum by passing Andretti who was heavy on downforce with a full-width Gurney flap on his rear wing.

On Lap 26, Ericsson twitched and slid into the wall at Turn 1 and then slithered along the wall to stop at Turn 2 with heavy right-side damage.

When the pits opened during the subsequent caution. In the race off pit road Hunter-Reay was the big loser, beaten not only by Dixon and Sato but also Andretti, Hinchcliffe and Rossi. Meanwhile, of course the early stoppers of course cycled to the front, Askew ahead of Pagenaud, Power, Kimball, Castroneves, Hanley, Hildebrand. Behind them were Dixon, Sato, Rossi, Andretti, Hinchcliffe, Hunter-Reay, VeeKay and Patricio O’Ward in another Arrow McLaren SP.

Pagenaud went straight into the lead at the restart, while Dixon carved forward to swiftly esconce himself in sixth, and Rossi moved into seventh ahead of Hildebrand. By contrast, Hunter-Reay, Sato, Andretti, Ferrucci, O’Ward and Hinchcliffe filled positions 10th through 15th, unable to move forward.

Pagenaud and Askew stopped on Lap 46 and Arrow McLaren SP got Askew ahead of the 2019 winner, Castroneves stopped next time by with Power halting on Lap 48. Power emerged ahead of his fellow alternate strategy rivals. However, on Lap 55, Askew would move past Power into 24th.

Thus Dixon moved back into the lead now heading Rossi by about half a second, the pair 3.5sec ahead of VeeKay, Hunter-Reay, Sato, Andretti, Santino Ferrucci in the Dale Coyne Racing with Vasser-Sullivan machine, O’Ward, Hinchcliffe and Josef Newgarden’s Penske.

Sato passed Hunter-Reay for fourth into Turn 3 on Lap 59.

Andretti made his second pitstop from sixth on Lap 60, having complained of too much understeer. Hunter-Reay, Tony Kanaan and Conor Daly in the USAF sponsored Carpenter car came in a lap later.

This started a torrent of stops, and there were a few obvious errors. Rossi wasn’t quite able to make it in after having been called in late while still in Turn 4 due to the AA #27 pitbox overheating and needing a reboot. Alex backed off and lost momentum but as he completed another lap. VeeKay hit his pit crew members coming in and then stalled as he left. He was assessed a stop and hold penalty. Karam came in too hot and missed his box altogether, having to be pulled back into place.

Dixon’s stop was so fast that he regained the lead as he emerged, so ahead of the alternate strategy runners – 4sec ahead of Askew and Pagenaud. Power had lost momentum, falling to seventh behind Castroneves, Sato and Rossi.

Dixon continued pulling away from his nearest pursuers, so on Lap 75 he was 8.6sec up on Askew and 10.8 ahead of Rossi who was on the same strategy. Pagenaud, Castroneves and Power stopped on Lap 77, Power’s crew managing to jump their man ahead of Castroneves. Askew was able to go to Lap 80 but emerged behind these three Penskes.

The yellows flew for a third time on Lap 84, as rookie Dalton Kellett struck the Turn 3 wall in his AJ Foyt Racing after a very distant attempt to pass Hanley for 27th. When the pits opened, the leading group peeled off into the pits, and emerged in the order of Dixon, Sato, Rossi, O’Ward, Newgarden, Andretti, Ferrucci, Rahal, Herta, Hunter-Reay, but by the end of the yellow stint the ‘off-strategy’ runners had stopped as well, Felix Rosenqvist in 19th ahead of Power, Pagenaud, Castroneves, Askew and Kimball. Hinchcliffe’s car had stopped in the pitbox and took a long time to get going again.

The restart on Lap 93 was a disaster near the back, Conor Daly going low onto the apron at Turn 4 while passing Alex Palou’s Dale Coyne Racing with Team Goh car. The ECR machine got unsettled and he spun down to the pit entrance and crashed, on a terrible day for Ed Carpenter Racing while Askew, close behind three Penskes, had his Arrow McLaren SP suddenly snap into oversteer and send him darting to the left and into the SAFER barrier at pit entry. He emerged from his car shaken and winded.

The restart on Lap 101, saw Rossi dive past Sato into Turn 1 to grab second behind Dixon, and not far behind, Ferrucci managed to pass Newgarden for sixth on the short chute into Turn 2. Ferrucci would soon dispose of Andretti too.

Dixon let Rossi into the lead in order to save fuel and make it the rest of the way on just two stops, while O’Ward moved past Sato into third, but Rossi had the same idea and backed off to allow Dixon in front, the lap speeds down to 211. Next time by, Rossi was back into the lead and this time they were back up to 215mph, and they continued swapping back and forth, just ahead of O’Ward.

Meanwhile Rahal had moved into sixth ahead of Andretti and Newgarden who had Herta tucked in behind, and Palou and Hunter-Reay not far off.

Dixon and Rossi continued their dosey-doe while Sato passed O’Ward for third place, but on Lap 122 the yellows flew again for Palou shunting his DCR-Honda at Turn 1 in the wake of Newgarden, and sliding into Turn 2. Everyone stopped when the pits opened on Lap 125, and Rossi sideswiped Sato and emerged ahead, triggering an investigation. Rossi would get penalised and sent to the back of the field.

VeeKay got to the front of the pack, and Dixon – allowed through by Rosenqvist – tucked into his draft. Rahal moved into third which became second when Rosenqvist pitted. Sato ran third ahead of Newgarden, Ferrucci, O’Ward, Herta, Power, Kanaan and Harvey. Pagenaud had to pit when Hunter-Reay took off his front wing and sent him into the pits. The slowing Penske jammed up the pack somewhat, allowing Rossi to pass six cars and move into 17th.

Sato moved past teammate Rahal to grab second on Lap 141, and but Dixon had a 5sec lead when the caution flew again and this time it was Rossi who was the cause, pushing high out of Turn 2 and sliding down the back straight with a broken flaming car. A long clean-up was required.

On the Lap 154 restart, Newgarden surged forward to pass Rahal for third, the picture muddied by Karam’s lapped car. Ferrucci and Herta moved up to fifth and sixth respectively ahead of O’Ward, while Hinchcliffe surged up to eighth ahead of Kanaan, Harvey, Castroneves and Power, the latter of whom had lost three places.

Sato moved ahead of Dixon for the lead, and the Ganassi ace hung back around 0.3sec in arrears. One second behind ran Newgarden with Rahal just 0.4 in arrears. Andretti in 13th was the first to stop on Lap 168, and next time by Sato, Newgarden, O’Ward and Kanaan pulled in.

With 31 to go, Dixon and Rahal and the other top 15 runners pulled in. The order resumed with Dixon still in front of Sato, Newgarden and Rahal, but Sato moved ahead of the Ganassi car with 28 laps to go, while Rahal passed Newgarden on Lap 173, and the top Penske runner also lost out to Ferrucci on Lap 174. Power was another Penske runner who had tumbled down the order however, after being warned about hitting pit equipment.

Zach Veach and Max Chilton ran out front in first and second, off strategy, 10sec up the road, with 20 laps to go, but Chilton ducked into the pits n Lap 184, and Veach on Lap 186.

Dixon was up with Sato now and trying to pass around the outside into Turn 1, with Rahal ready to pounce. With 10 to go, Sato’s RLL car was 0.7sec in front of the Ganassi car of Dixon, but now Sato was checked up behind four cars, and Dixon closed in.

Then Taku passed Kanaan to briefly get a buffer between them and then Spencer Pigot in the third RLL car, backed by Citrone/Buhl Autosport, had a monstrous shunt, spinning off Turn 4 into the wall and back down the track to the attenuator that separates the pitlane from the front straight. He ricocheted across the track and back into the outside wall, but he managed to step out of the car.

The race was not red flagged, and Sato ran out the winner under yellow, while Dixon scored second place despite 111 laps in the lead, and Rahal third.

Ferrucci, last year’s rookie of the year, got a fine fourth place ahead of Newgarden, O’Ward, Hinchcliffe, Herta, Harvey and Hunter-Reay.