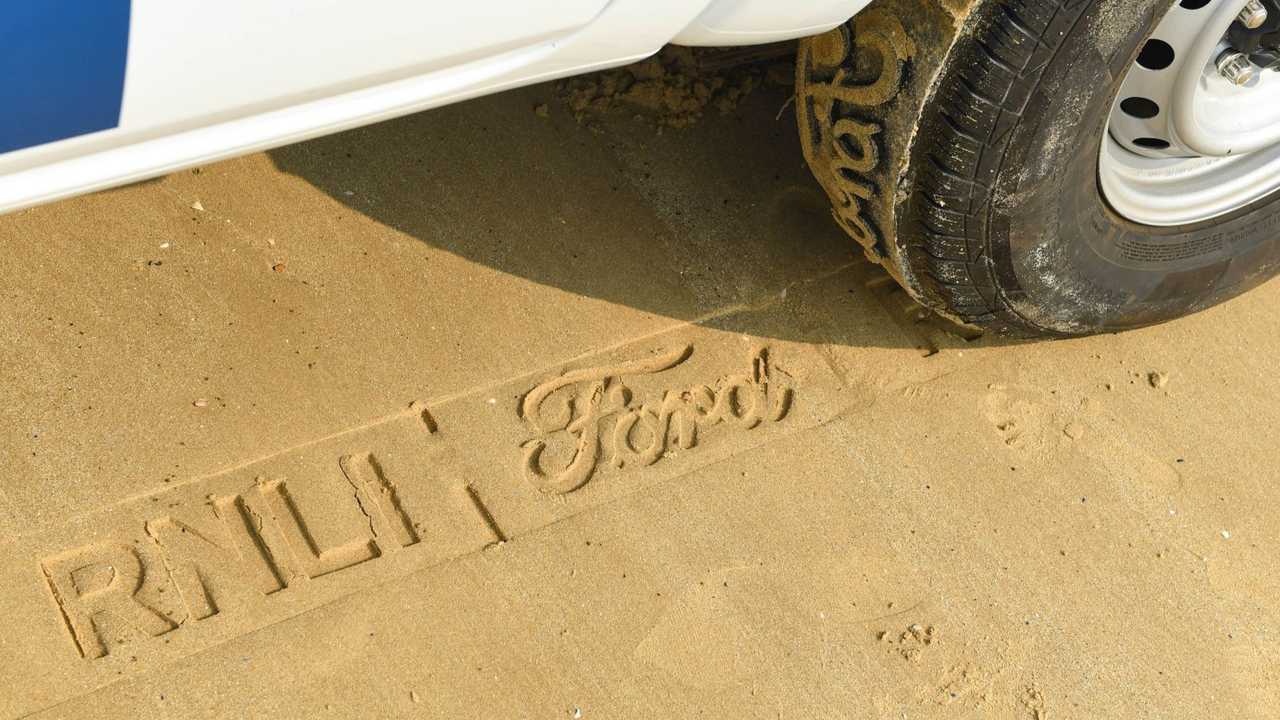 Ford has joined forces with the Royal National Lifeboat Institution (RNLI) to leave water safety messages in tyre tracks. The American company has commissioned some special tyres that stamp useful advice on the sand as the lifeguards’ Ranger pick-up trucks drive along beaches.

Trialled by Ford at Minnis Bay, just outside Margate, in Kent, the tyres feature advice such as ‘Emergency? Call 999’ and ‘no inflatables’. The custom tyres are made from a mould of each water safety message, which in turn creates a rubber tyre sleeve that is wrapped around the tread and fixed into place permanently.

Each message can then be left in the wheel tracks of the RNLI lifeguards’ Ranger pick-up truck as it passes, enabling the RNLI to spread water safety messages quickly across miles of beaches. Ford and the lifeboat charity are now looking into the long-term use of the vehicle.

Here’s the difference between friction and studded winter tyres

The slogans, which also include ‘Float to live’, in reference to the RNLI’s advice that those who get into trouble should float on their backs instead of thrashing around in the water, were decided after new research showed many Brits have got – and could get – into difficulty by the sea. According to the study, 40 percent of people who would take an inflatable into the sea in the UK have previously got into difficulty, while more than a third of people (38 percent) also said they’d consider taking a swim alone.

“Spending the day at the beach or out on the water is a great way to have fun and stay active but it’s easier than you think to get into trouble,” said Guy Addington, the regional water safety lead at the RNLI. “With record temperatures, we’ve seen high numbers of people at UK beaches this summer so it’s imperative that we continue to raise awareness of important water safety messages. We’re delighted that Ford is helping us continue our mission to spread these messages that can help save lives.

“It is vital that anyone visiting the coast understands that the beach can be a dangerous environment and you must take responsibility for you and your family this summer. No one ever goes to the coast to be rescued yet RNLI lifeguards rescue thousands each year.”

Meanwhile Andy Barratt, the managing director of Ford of Britain, said the company was proud to be supporting the RNLI’s life-saving efforts.

“We’ve been delighted to continue supplying vehicles to the RNLI, and support the outstanding work they do to keep us all safe,” he said. “It’s very exciting to see our Ford Ranger being used to spread these important water safety messages.”