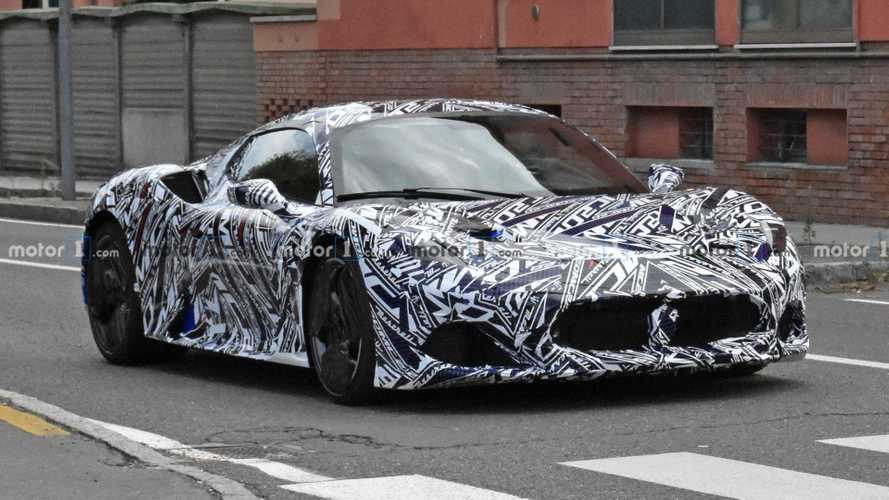 When was the last time you saw camouflaged wheels?

Maserati is in the midst of a product overhaul that started with the Ghibli gaining a facelift, a hybrid, and a V8-powered Trofeo version. The larger Quattroporte has also embraced Ferrari power by receiving the Trofeo treatment, but the model we’re most excited to see this year is the MC20. Debuting in the first half of September, the all-new supercar has been caught in the best spy shots to date with the full production body and lights.

The mid-engined coupe is still hiding under heavy camouflage as Maserati even went to the trouble of disguising the wheels, which is something that we rarely see. Despite the body wrap with graphics of the Italian flag as well as the make and model, it’s easy to notice the massive air intakes at the back to cool down the engine.

We’re hoping those two exhaust tips will be a tad larger on the final version and they actually might be judging by the significantly larger cutouts in the rear bumper. A closer look at the rear reveals an aero element behind the engine cover that appears to incorporate a rearview camera. Generously sized air intakes at the top and bottom of the rear quarter panels, in front of the rear wheels, further denote there’s a powerhouse sitting behind the seats.

Additional vents have been implemented in the front wings/fenders to cool down the brakes and it seems the front boot is flanked by air ducts to make the MC20 as sleek as possible by reducing its drag coefficient. Overall, the low-slung coupe screams performance even with the camouflage plastered all over its aggressive body.

It's been teased repeatedly:

With Ferrari deciding not to renew its engine supply deal with Maserati once the current agreement comes to an end, the MC20 will be powered by an in-house engine. Dubbed “Nettuno,” the 3.0-litre V6 equipped with a pair of turbochargers will develop 630 bhp and 730 Newton-metres (538 pound-feet) of torque. Should that not be enough, Maserati has already announced plans to electrify the supercar later during its life cycle.

Meanwhile, the regular Maserati MC20 will be unveiled during the "MMXX: The time to be audacious" event programmed to take place on September 9 and 10. You can rest assured there will be more teasers between now and then to ease the wait.