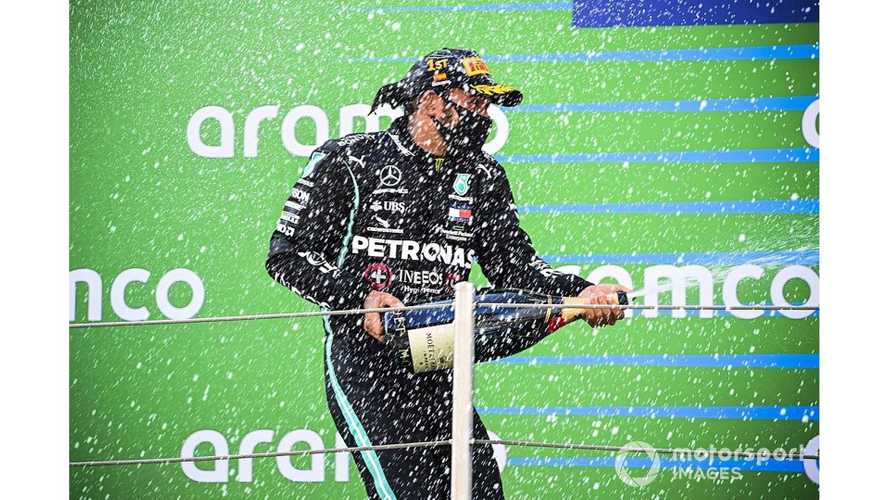 Hamilton took a dominant victory for Mercedes at the Circuit de Barcelona-Catalunya on Sunday to extend his lead at the top of the F1 drivers’ championship to 37 points.

The result marked the 88th win of his F1 career, leaving him just three victories shy of Schumacher’s record tally of 91 victories.

But after matching Schumacher’s long-standing record of 155 podium finishes at Silverstone one week earlier, the result in Spain saw Hamilton move clear onto 156 podiums.

Schumacher had been F1’s podium record-holder since the 2002 British Grand Prix, when he surpassed Alain Prost’s previous benchmark of 106 rostrums.

What does the future hold for Lewis?

Hamilton says it's not the right time for contract talks

Asked about beating Schumacher’s podium record after his victory in Spain, Hamilton said he found it “very strange” to be beating the tally set by a driver he looked up to when starting out in racing.

“All of us drivers here grew up watching Michael and dreamed of one day being here,” Hamilton said.

“What is happening right now is far beyond what I dreamed as a kid. I’m incredibly grateful for the opportunity that I’m given every day.

“I think Michael was obviously an incredible athlete and driver.

“So I just always feel really humbled and honoured to be mentioned in the same light as a driver like him, and Ayrton [Senna] and [Juan Manuel] Fangio.

“It’s pretty cool. And I hope the Hamilton family are proud also.”

Hamilton has stood on the podium at more than 60% of the races he has entered since making his debut in 2007.

Schumacher’s podium percentage stands at 50.32%, with his final top-three finish coming at the 2012 European Grand Prix in Valencia.

Of drivers who made more than one grand prix start, Hamilton only trails Luigi Fagioli and Fangio for podium conversion rates.

The next record of Schumacher’s in sight for Hamilton is his tally of 91 race wins, which he could break at the Russian Grand Prix in September should be win each of the next four races.