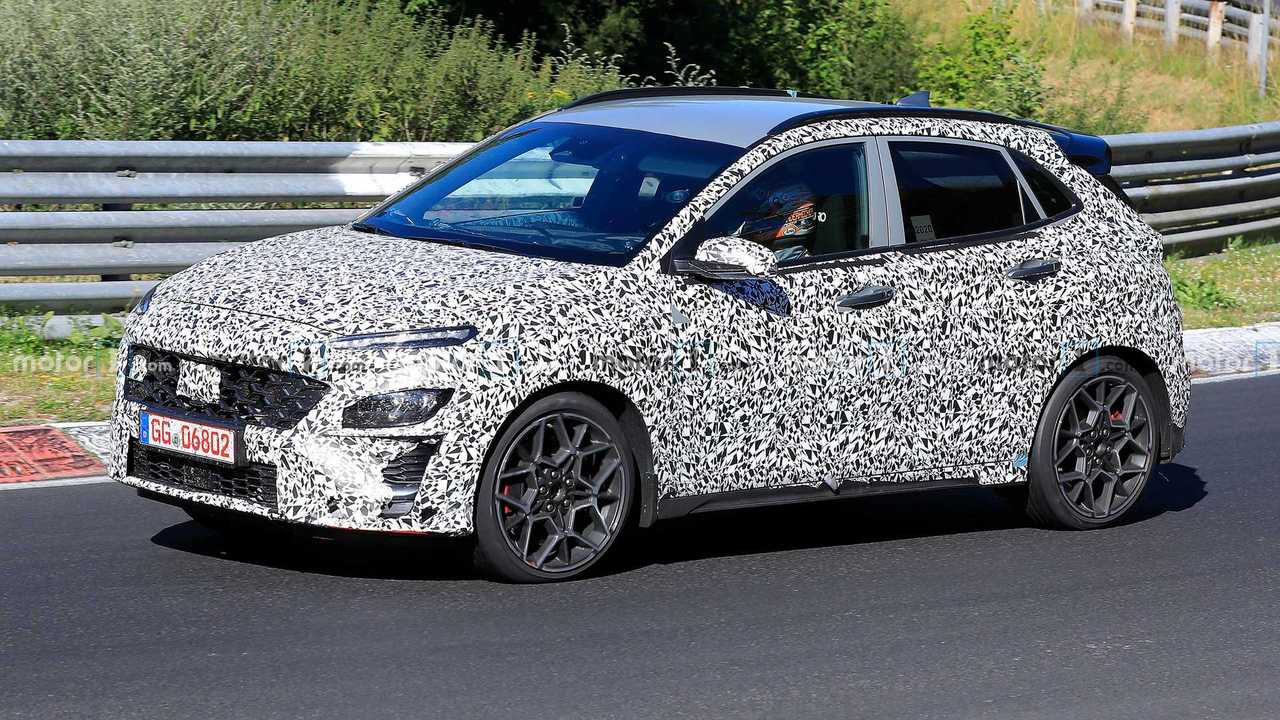 It also has an aggressive rear spoiler.

Petrol, diesel, hybrid, and electric – the Kona comes in many forms. Hyundai is preparing to offer even greater variety by spicing up its small crossover through a high-performance N variant. It’s been spotted yet again undergoing final testing at the Nürburgring with the full production body, wheels, lights, etc.

Sitting closer to the road than a regular Kona, the prototype had a stiffer suspension setup and new alloy wheels likely measuring at least 18 inches. Red brake calipers at the rear axle denote the prototype’s sporty nature, but it’s the back of the car that truly reveals its athletic character. Those generous exhaust tips are only part of the story as we’re also noticing a chunky roof spoiler incorporating a triangular third brake light.

It would appear Hyundai has tweaked the lower lights both at the front and rear, which could mean the N variant is going to be based on the facelifted Kona. The subcompact model has been around for approximately three years, so the timing would be right for the quirky crossover to go through a typical mid-cycle update.

You can easily tell the prototype is virtually production-ready on the outside as Hyundai even slapped on the N badge on the front grille in the same position where you’ll find the letter on the i30 N and Veloster N. It’s a slightly different story with the interior as the roll cage certainly won’t be installed on the final version and there’s a good chance those body-hugging Recaro seats also won’t be there.

It is believed the Kona N will rock a turbocharged 2.0-litre petrol engine with 275 bhp channeled to the road via an eight-speed, dual-clutch automatic transmission. A warm Kona N Line is said to use a smaller 1.6-litre turbo with around 215 bhp also hooked up to a DCT with the same number of gears.

The official reveal should take place in the near future, but in the meantime, Hyundai is gearing up to introduce yet another N model. We’re talking about the i20 N, which will compete against rivals including the Ford Fiesta ST and VW Polo GTI.