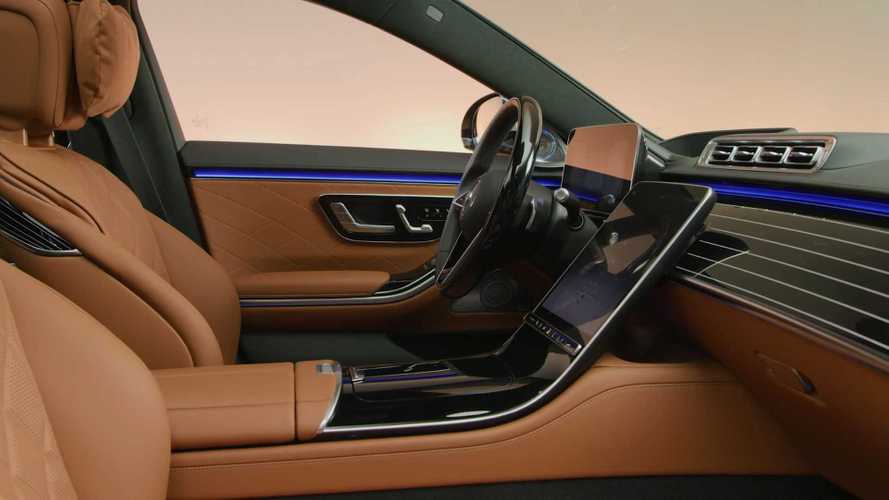 Forget about the five screens, the real magic is in the back.

Mercedes has previewed the new S-Class’ interior a couple of times already, and yet we still don’t have the whole picture. That all changes today as we were able to find fully revealing images of the luxurious cabin prior to the official premiere set for September 2.

While the three-pointed star has so far focused on the five-screen setup, intricate ambient lighting, and front airbags for rear passengers, the full interior was actually hiding in plain sight on the company’s media website.

The luxury cocoon is being featured here in Benz format as the Maybach version will have even greater legroom courtesy of a stretched wheelbase. Mercedes will step up its game yet again in the premium segment by offering heated cushions for the rear headrests as well as heating the area above the already heated armrests on the door cards. Speaking of newly added features the naked eye can’t see, Mercedes has added more acoustic foam than ever to keep the cabin nice and quiet.

While the S-Class featured in the adjacent gallery has a fancier four-seat layout, the new generation will also be offered with a more practical five-seat configuration. Buyers will get to pick from the "business centre console" seen here or a folding centre armrest. Aside from the obvious changes to the infotainment system – now a 12.8-inch touchscreen – the new S has 27 fewer hardkeys than the W222 by adopting touch-sensitive controls.

In addition to the sleek new controls and touchscreens, there will be other ways to play with the settings. The “Hey Mercedes” assistant will support 27 languages and there's going to be greater support for hand gestures, allowing the driver to operate the sliding sunroof. Another party trick will be the availability of two head-up displays, with the more advanced one featuring augmented reality for the first time in a production car’s HUD.

New Mercedes-AMG S63 to be a plug-in hybrid with around 800 bhp?

The standard-wheelbase S-Class will be 71 mm (2.8 inches) longer between the axles than its predecessor, resulting in a wheelbase of 3106 millimetres (122.2 inches). Step up to the LWB variant and that one too will add 51 mm (2 inches) for a total of 3216 mm (126.6 inches). The Maybach derivative will be even longer, and chances are an extra-long Pullman will follow for royalties and political leaders.

If you're interested in the oily bits, head over to our Everything We Know hub to learn about the engines, rear-wheel steering, aluminium-intensive construction, and other relevant details.