Still camouflaged, the new spicy Panamera lapped the 'Ring in 7:29.81.

Porsche is about to give the Panamera a mid-cycle update to keep it fresh and competitive as it battles the Mercedes-AMG GT 63. The peeps from Zuffenhausen are kicking off the teaser campaign by announcing a hot new derivative of the performance saloon has set a (highly) specific Nürburgring record on July 24. Quoting from the press release, it’s the fastest “Porsche four-door saloon in the 'executive cars' category.”

The record-breaking Panamera has been a long time coming, with first reports about the so-called “Lion” version emerging back in 2019. The claimed 7:10 time is turning out to be overly optimistic as the official time certified by an independent expert witness is of 7 minutes and 29.81 seconds. Porsche says it’s enough to set a new record for a production model in the “executive cars” category.

The new version shaved off about 13 seconds from the Panamera Turbo’s lap time achieved in 2016. Test driver Lars Kern got behind the wheel of the speedy saloon in both instances, and Porsche recorded the times for both the historical 20.6-km (12.8-mile) layout and the longer 20.83-km (12.94-mile) configuration of the Nürburgring Nordschleife. It completed the slightly shorter course in 7:25.04.

Porsche managed to marginally improve the AMG GT 63 S' performance, which needed 7:25.41 for the historical route and 7:30.11 for the other configuration longer by about 200 metres (656 feet). As such, the new Panamera has been crowned as the fastest car in the Executive class at the 'Ring.

The Panamera is about to get a facelift: 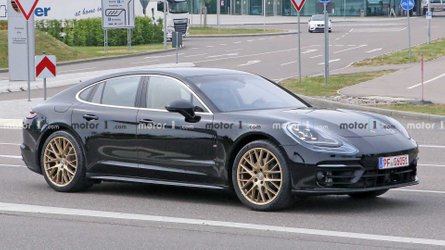 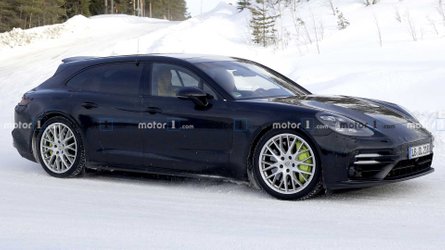 While Porsche isn’t willing to spill the beans just yet regarding the car’s technical specifications, we do have some preliminary details. The Panamera benefited from chassis and engine upgrades, along with a reworked electromechanical roll stabilisation system and new bespoke Michelin Pilot Sport Cup 2 tyres that will be optionally available. The spicy new derivative will have more power and sharper steering, with Porsche saying body control and stability through the corners have been improved as well.

The official reveal is slated to take place at the end of the month when we’ll learn whether this is an upgraded Panamera Turbo or a new member (Turbo S?) of the already extensive lineup.

As a final note, we'll remind you Porsche's other saloon – the fully electric Taycan – did a lap of the Nürburgring in the shorter configuration in an impressive 7:42.

P.S. The Panamera is technically a liftback or a hatchback if you prefer, but the vast majority of people – including Porsche - describe it as being a saloon.