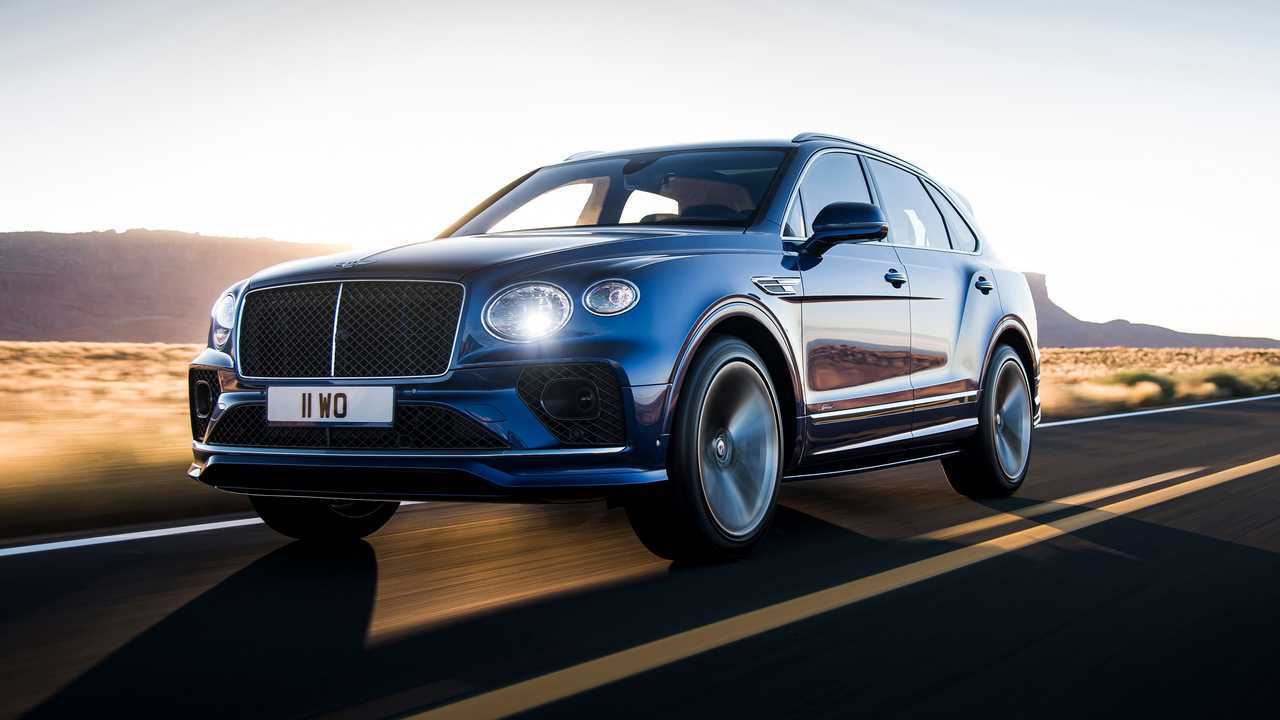 The sporty SUV gets revised styling and a luxurious new interior.

Hot on the heels of more plebeian members of the SUV family, Bentley revealed the updated 2021 Bentayga Speed, boasting similar performance as before but a much-revised interior and exterior. Unlike earlier model years, Bentley shoppers who want the woofling W12 engine will have to step into the Speed, as the base Bentayga is limited to a V8.

On the Speed, however, these features are made more aggressive thanks to dark-tinted headlamps and grille mesh, racy body-colour rocker extensions, and a rather bold flow-through roof spoiler atop the tailgate. Unique front and rear bumper treatments are appropriately aggressive for the Speed, punctuated by an unusual piece of chrome trim that seemingly cuts through the bodywork to join similar shiny stuff on the doors. Trim-specific 22-inch wheels come standard in either a painted or dark-tinted finish.

The outgoing Bentayga’s rather unfortunate dash-to-axle ratio persists, and not all of us are sold on the beam-me-up taillight design. Otherwise, the alterations make the Speed look more aggressive and Bentley-like than its somewhat soft pre-facelift predecessor.

Changes to the interior up the ante on what was already a very posh luxury SUV. The Bentayga Speed comes with its own design split that features darker interior colours paired with contrasting leather “swooshes” (Bentley’s phrasing, not Nike’s) around the doors, on the edges of the seats, and on the lower front console. For the first time, Alcantara is available in the Bentayga, appearing on the headliner, pillars, steering wheel rim, shift knob, and seat centres.

Standard seat embroidery comes standard on the sporting Bentayga: “Speed” script is the default, though the Bentley logo is a no-cost substitution. The Bentayga Speed also comes with “Mulliner Driving Specification” seat quilting – two stitch lines appear on the seat faces, one matched to the interior’s main hide and the other to its contrast colour. Discrete Speed badging appears on the dash trim and doorsills.

In addition to the pleasant interior materials, the 2021 Bentayga Speed also gets an updated driver information and infotainment package. A new 10.9-inch touchscreen comes standard with wireless Apple CarPlay (though Android users can’t cut the cord just yet), while there’s a new, fully digital instrument panel that offers a large map-and-media view or a more traditional two-gauge layout. The head-up display is more advanced than before, offering traffic information, street names, and more. Embedded navigation is likewise improved with satellite maps and a three-dimensional view.

As before, the 2021 Bentley Bentayga Speed takes marching orders from a 6.0-litre W12 engine delivering 626 bhp (467 kilowatts) and 664 pound-feet (900 newton-metres). The torque-rich engine delivers all of its twist over a broad rev range (between 1,500 and 5,000 rpm) ensuring nippy responses from the eight-speed automatic transmission – if it's good enough for Pikes Peak, it'll be good enough for your commute. Bentley claims a sprint to 60 miles per hour in just 3.9 seconds and a maximum top speed of 190.

The eight-speed automatic transmission is likewise carried over, fitted with a decoupling torque converter that allows the Bentayga to sail with reduced drag when the driver is coasting down the motorway at a consistent speed. A sophisticated cylinder deactivation system works on the W-shaped engine, shutting down an entire “VR6” segment when possible to save fuel. The Bentayga automatically switches which bank of six cylinders gets shut down, ensuring the catalyst reduces emissions effectively.

Four Drive Dynamics setups are available: Comfort, Sport, and Bentley (programmed at company HQ for an ideal balance of performance and luxury), as well as a driver-programmable Custom mode. Bentley Dynamic Ride is standard, boasting 48-volt active roll stabilisers and a recalibrated brake-based torque vectoring system on the rear axle. The Bentayga Speed continues to offer carbon-ceramic brakes as an option – the largest and most powerful stoppers available from Crewe – providing greater clamping force and improved fade resistance while saving 20 kilograms (44 pounds) of unsprung mass compared to iron brakes.

When the W12-powered Bentayga Speed arrives (possibly late this year), expect it to demand a premium of at least £30,000 over the V8. Between the cheaper base model, the sporty Speed, and the yet-to-be-revealed 2021 Bentayga Hybrid, Bentley’s SUV lineup is fresher than ever.