Sebastian Vittel enjoyed the opportunity to drive a Tesla Model 3 Performance with Tesla's 'Track Pack.' He borrowed it from Tesla France in order to drive it and provide feedback and data about the car, along with his personal opinions. During his time with the Model 3, he was able to keep up with a Ferrari 488 Pista on the twisty track.

Vittel makes it clear up front that he's not a Tesla fan or owner, and he doesn't hate Tesla either. Honestly, he just likes to drive fast cars. It's not even important to him what type of fuel they use. After spending some time with the Model 3, he believes other automakers need to get with the program, and as quickly as possible. 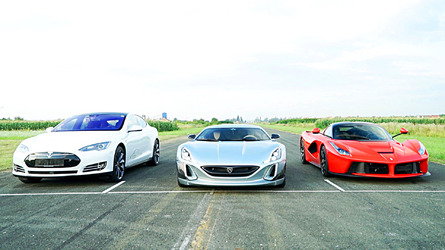 Vittel doesn't say anything about winning or losing. He just drives the car. In the YouTube video description, he provides detailed information about the car, the track, and the weather. The Model 3 was initially charged to 100 percent and driven for 30 minutes (down to 20 percent), then charged again and driven more.

The outside temperature is a whopping 36C (97F). The car's AC is off. The track is a 3.2 km circuit in France – Circuit de Bresse in France. The track temp is measure at 55C (131F). The Model 3 Performance's best time is 1.41.60 with bit of traffic. As you can see in the video, the Model 3 Performance appears to have no problem keeping pace with a Ferrari 488 Pista.