Why does this Dodge Demon lose three races in a row to 2020 Corvette? 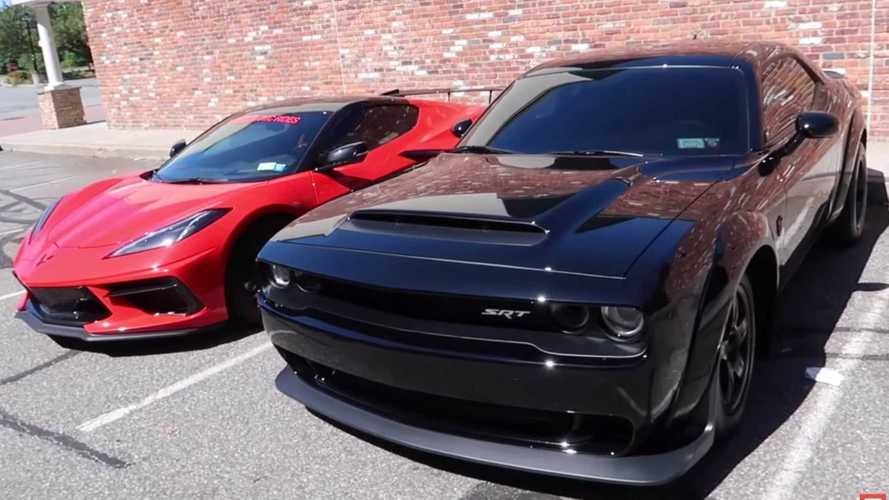 Power is nothing if it can't get to the road.

The Dodge Challenger SRT Demon had its moment in the sun as the king of the quarter-mile, but there's a new fighter on the scene. Despite being far less powerful, the 2020 Chevrolet Corvette can give it a serious battle in a drag race – as long as the conditions are right.

In this case, there's a stock Corvette going up against a modded Demon. The tweaks to the Dodge include skinny wheels in front and sticky Mickey Thompson rubber on the rear. The catalytic converters are gone, and it sounds like there's some additional exhaust work, too. The Check Engine light apparently isn't on, so with the cat-less pipes, this hints at the possibility of a tune, too.

The odds certainly seem stacked in the Dodge's favour, but wait and see what happens. In the first race, the Corvette leaves it in the dust because the Demon is apparently so loud inside that the driver can't hear the 'Vette's horn honking.

In the next run, both vehicles get a proper start. The Demon starts strong for the first moment, but then the 'Vette drives past. It appears the Dodge might be gaining back a little of the distance near the end but not enough.

The final race is mostly a repeat of the second one. The Corvette drives away, and there's nothing the Demon can do to keep up.

So how does the Corvette with 495 bhp (369 kilowatts) beat a Challenger Demon with at least 808 bhp (603 kW), although probably more with the mods? Traction appears to be the answer, in the 'Vette owner's opinion. These races take place on an un-prepped stretch of road. Even with the Mickey Thompson tyres that are nearly slicks, the Dodge doesn't seem capable of putting its power down as effectively as the Chevy on this surface.