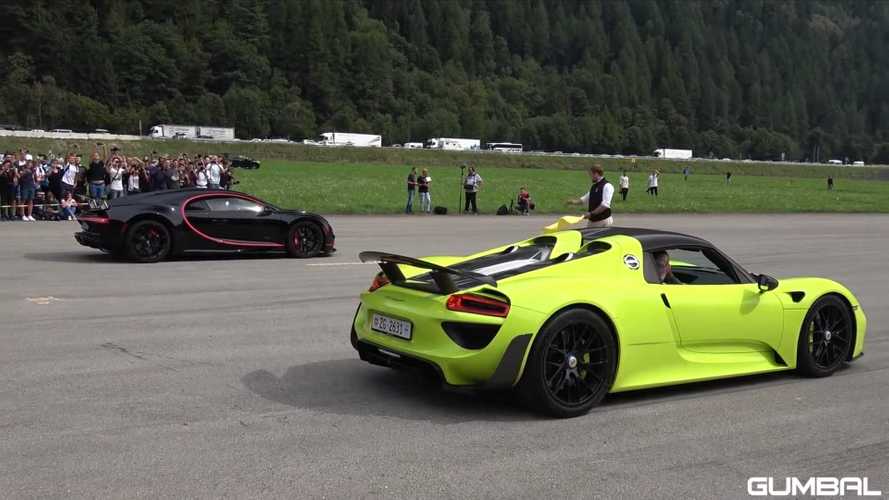 It’s a bit unconventional, but still exciting to watch.

The Bugatti Chiron and Porsche 918 Spyder were like ships passing in the night. As one bowed out, the other rolled in. The Porsche disappeared in 2015 with the new Bugatti arriving in 2016. While you could slot both in the hypercar category, they reach those heart-stopping speeds differently. The Porsche is a plug-in hybrid, but the Bugatti isn’t, and the drag race in the video above shows which is quicker.

It’s difficult to tell, but it appears the Porsche got a better start off the line than the Bugatti, but the slight lead is only momentary. By the end of the race, the Bugatti had closed the gap and pulled ahead. The video quality isn’t superb, but Bugatti crossed the finish line ahead of the Porsche, earning itself the win. You can see the 918’s brake lights illuminate before the Bugatti’s.

While there’s a substantial performance difference between the two, the Porsche kept up quite well. Both manufacturers claim a mid-2.0-second sprint to 62 miles per hour (100 kilometres per hour), though the Bugatti’s top speed dwarfs the Porsche’s – 214 mph (345 kph) to 261 mph (420 kph). But performance often comes down to more than just numbers on a page. It’d seem odd to pair Porsche’s performance hybrid against Bugatti’s powerhouse, but there is more than one way to win a race.