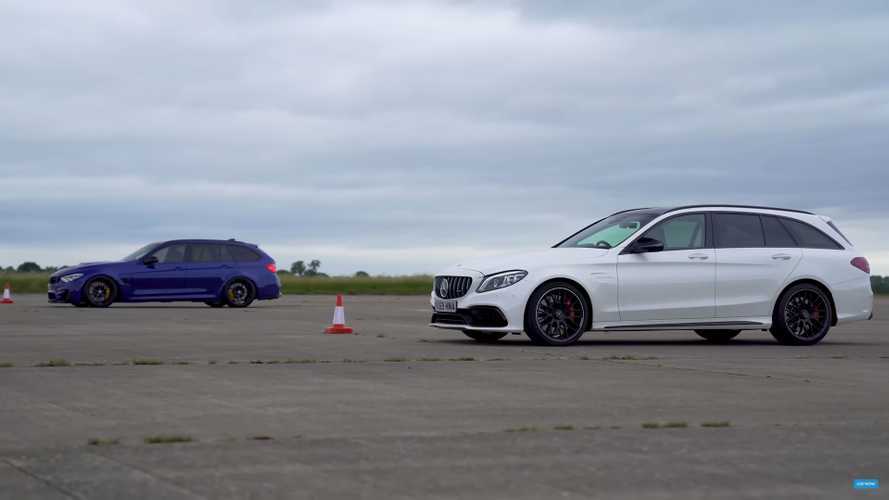 Lots of long roof love in this video.

We love a good drag race. We especially love good races with estates, and when it involves a direct rivalry between German high-performance models from Mercedes-Benz and BMW, it’s even better. That’s the essence of this new Carwow video pitting the epic Mercedes-AMG C63 S Estate against an F81 BMW M3 Touring. Wait, what?

Before you BMW fans burst a blood vessel with how little we know about fast Bimmers, this M3 Touring isn’t a factory-built machine. BMW never offered such a vehicle, but that didn’t stop someone from building one. This car started life as an unassuming 320d and received a host of M3 parts from a wrecked F80, including the powertrain.

The result is the sexy blue long roof seen in this video, which is well-deserving of the M badging it wears. Actually, it even goes beyond the standard F80 M3 with some extra engine work to its twin-turbo inline-six. According to the video, it develops 540 bhp (403 kilowatts) compared to 510 bhp (380 kW) in the Merc. That should make for a good contest, albeit tipped in the BMW’s favour.

Estates we wish were real:

Is it though? This estate conversion is exceptional, but it does have some difficulty putting its power to the ground. The estate cars battle it out through four races – two from a dig and two from a roll – and while the BMW doesn’t lose them all, it’s certainly has strong and weak points. The F80 M3 already has a reputation for being a finicky vehicle to launch, but this custom estate seems to struggle even harder despite the extra mass it carries over the rear wheels.

Still, it’s not slow by any means. Both vehicles clock quarter-mile times in the 12-second range, and the rolling start races see each wagon easily reach 155 mph. For extra grins, the video ends with a braking competition that's a veritable stalemate. So even with the Bimmer’s launching difficulties, it looks like a supremely fun car to drive.