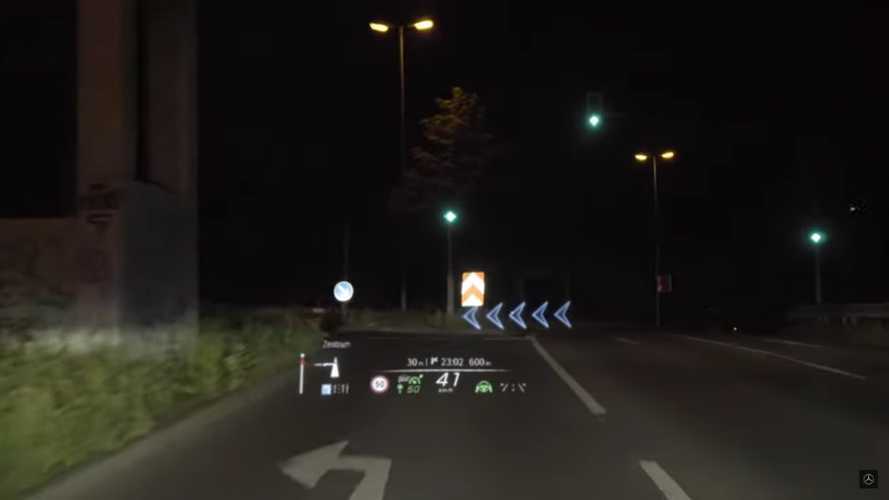 Those blue arrows aren't on the road.

The teaser campaign for the next Mercedes-Benz S-Class continues. Actually, this isn’t much of a teaser since we’ve already seen a preview of this technology. We’re talking about the very cool augmented reality head-up display (AR-HUD) the new luxury flagship will feature, but whereas previous glimpses were part of larger teaser vids, this new clip posted to Facebook is all about the AR system. And it’s creepy brilliant.

What is creepy brilliant? In short, it’s seeing a computer-generated image of an arrow projected onto the windscreen that swoops, banks, and generally flies across the glass while you navigate a roundabout. It’s red lines outlining the edge of a corner as you go around. It’s weird glowing lights appearing under cars you’re following. And yes, it’s floating chequered flags hovering at places you mark as destinations. These are all functions of the Merc’s AR-HUD that we see in this new video.

We should further clarify that the creepy aspect of this is just temporary. Seeing such animated actions on the windscreen certainly makes for a futuristic experience, much like the way we felt using augmented reality on our phones for that inaugural round of Pokémon Go. But just like the shock of seeing fictional creatures hopping around city streets faded, so will this. All that will remain is the cool factor, and we can’t deny the cool factor of having specific intersections and guided directions highlighted in a manner such as this.

The new S-Class is coming:

It’s one part of a technological tour-de-force that will be the next-generation S-Class. The interior will offer up to five digital screens, with the literal centrepiece being the central 12.8-inch infotainment screen. The driver gets a fully digital instrument cluster, and passengers can have individual screens that can share what’s seen on the main screen in front.

We don’t have much longer to wait for the new Mercedes to arrive. The next-generation S-Class is slated to debut in September. In the meantime, stay tuned for more S-Class teasers.