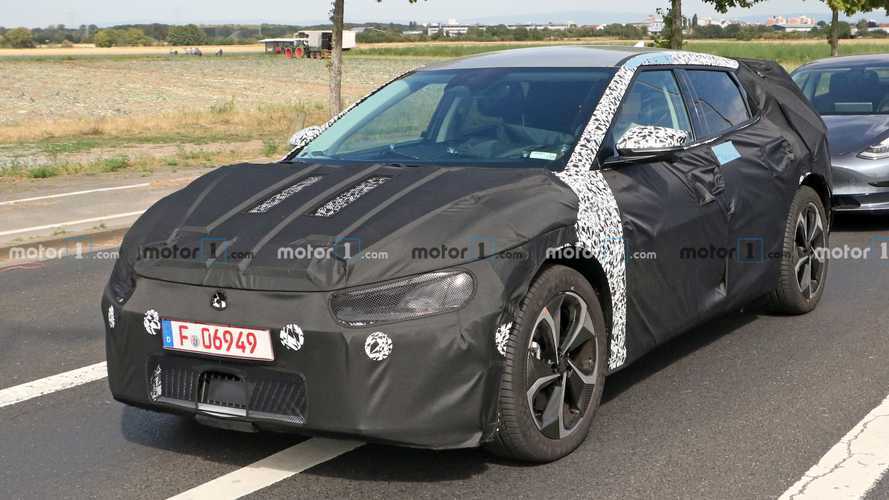 The Kia's styling has cues from the Imagine concept.

Here's a fresh look at Kia's upcoming electric vehicle. This time it's testing with a Tesla Model 3, which offers a hint at the benchmarks that the company is setting for the new EV.

Kia keeps the vehicle under heavy camouflage with a mix of blocky pieces to conceal the shape of the body and a dazzle-pattern wrap. In front, the nose arches downward, and there are oval headlights. The A-pillars have a steep rake and lead to a fairly flat roof.

Judging by the shape of the concealed hatchback, there's an angled rear window but a fairly flat bumper below it. The taillights are barely visible underneath the camo. You can see them in the corners just below the window.

Gallery: Imagine by Kia concept at the 2019 Geneva Motor Show

When all of the concealment comes off, expect this EV to look a lot like the Kia Imagine concept (gallery above) from the 2019 Geneva Motor Show. From the exterior, the changes for the production version appear to include the more conventional headlights and the addition of a B-pillar to support conventional door hinges. The shape of the hatchback seems sharper in these spy shots, too.

When Kia debuted the Imagine concept, the company said that it intended the model to blur the lines between segments. The vehicle is not quite a crossover but also has a different shape than a  normal five-door hatchback.

While the production model might look like the Imagine on the outside, it's likely to be very different on the inside. The concept had 21 high-resolution screens across the dashboard. The displays on the passenger side were canted on weird angles that looked neat but didn't seem very functional.

The powertrain for the production version of the EV is still a mystery. It would allegedly be able to reach 60 mph in less than 3 seconds and offer a driving range around 300 miles (483 kilometres).