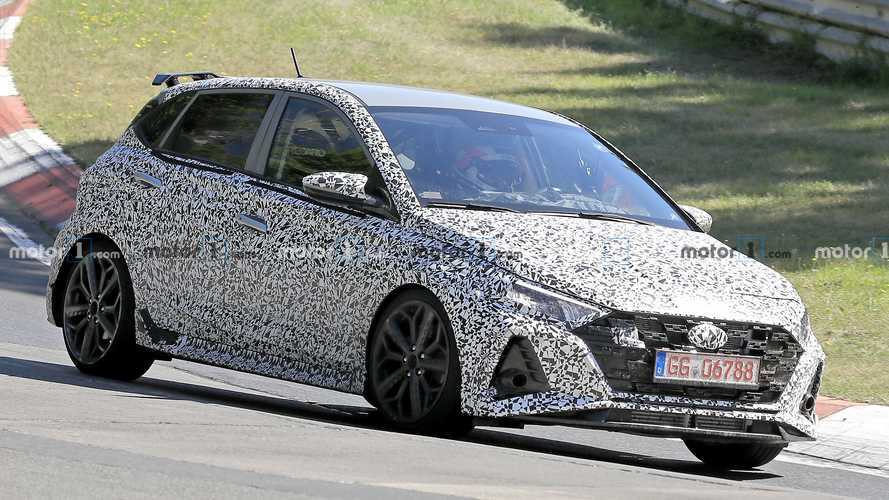 Hyundai is slowly peeling the camouflage off the i20 N hatch. The latest batch of spy photos shows the car is back again at the Nürburgring, though this time with a bit less covered than before. Hyundai has already teased the new car in a video back in May, so it feels like its reveal is fast approaching; however, Hyundai has yet to say when that’ll happen.

The i20 N will join the automaker’s other N performance model the i30 N. Specific details about the car’s performance remain a mystery. We expect the I20 N to produce around 200 bhp (149 kilowatts), but we don’t know which engine will help motivate the hatchback. The latest rumours suggest it could use the Kia Ceed GT’s turbocharged 1.6-litre petrol engine or a detuned version of the larger 2.0-litre from the i30 N. We’re hoping Hyundai offers a manual gearbox option to compliment the dual-clutch automatic.

The new photos show the i20 N losing its black fabric coverings. We can see the front-end design with the black (functional?) intakes pushed to the outside of the bumper along with the headlights. At the rear, we can spot the roof spoiler and part of the taillights. We can also spot the rear diffuser along with the large tailpipe. The lowered suspension and beefier brakes are still present.

As Hyundai has noted, a reveal should be imminent, but that means it could happen in late 2020 or early 2021 to compete against the Ford Fiesta ST, VW Polo GTI, and the Toyota GR Yaris. Expect more Hyundai N models, too, like the Kona N and Tucson N.