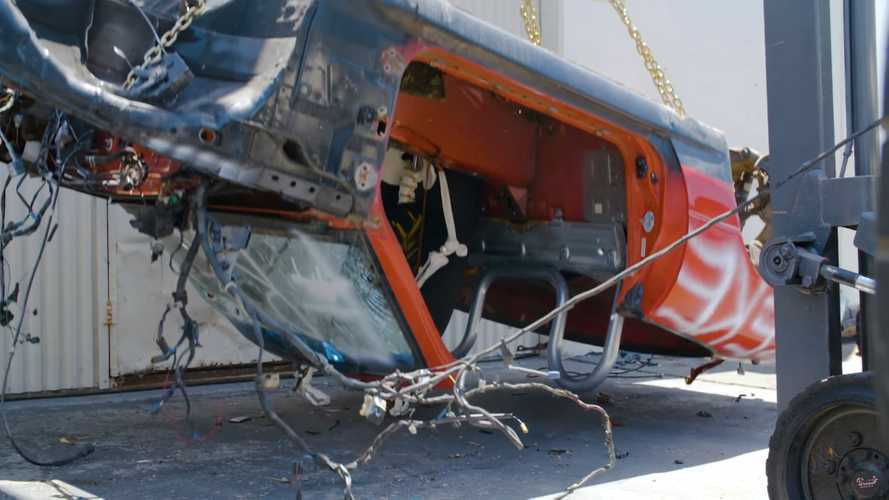 Folks, we’re going to do our best to avoid the obvious cliché about purchasing cheap items but honestly, it’s tough. There’s a time and a place to take the less expensive road, but when it comes to safety, most of the time you get what you pay for. Dammit, we didn’t even get past the first paragraph. Oh well, we tried.

To make that live for you, Donut Media has a rather telling video about roll bars. We aren’t talking about off-road bars, but rather, functional bars for convertibles. To be specific, this clip focuses on the Mazda MX-5 – a small roadster that often leaves driver and passenger heads level with or even above the windscreen. Should an accident cause the car to roll over, that’s no bueno.

Enter the contestants for this comparison. In the cheap corner, we have a silver roll bar that was allegedly purchased online for a whopping $65 (£50). It looks rather stylish, but with four small mounting points on a single horizontal axis, it probably won’t offer much protection. In fact, the bar flexes just with a bit of human muscle pulling on one end. The other bar is black and triangulated, and though it costs $600 (£475) it’s considerably heavier and doesn’t offer a hint of movement.

Before proceeding, we have no idea if the $65 roll bar was actually marketed as a functional bar. Oftentimes, such items are considered style upgrades but regardless, this video shows why such a design should never be relied upon to serve as an actual protective device. That’s because the video sees a wrecked MX-5 with the cheap roll bar installed literally dropped on its roof.

How did the sketchy bar hold out? Technically speaking, the bar itself didn’t bend and none of its four mounting points came loose. However, the location of those mounting points allowed the bar to flex forward upon impact, actually hitting the crash dummy skeleton in the head. With no other reinforcement points outside the single horizontal axis, the bar was effectively useless.

So then, what’s the moral of this story. In short, you get what you pay ... yeah we already covered that. Um, don’t drop a MX-5 on its roof with a cheap roll bar unless you're already a skeleton? Sure, that works.