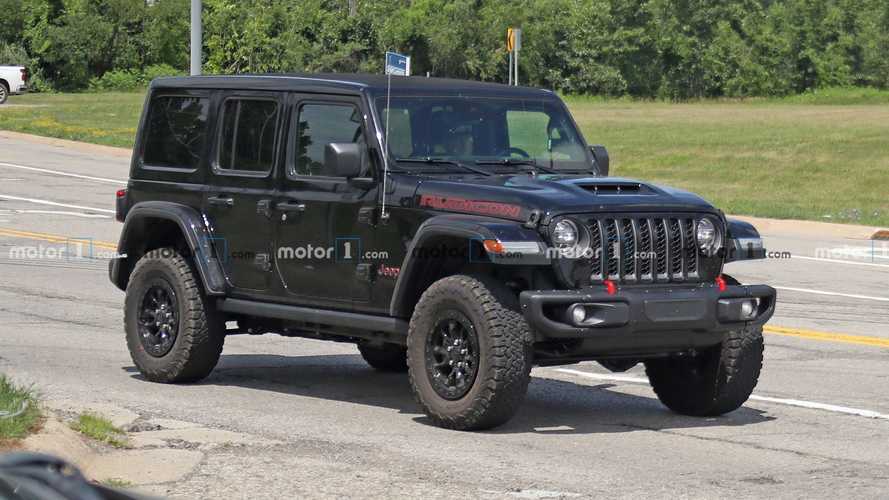 The rumour of this wild concept getting a production version now is more believable.

In a real surprise, spy shots show a prototype for a production-spec Jeep Wrangler Rubicon 392 on public roads in Florida. The concept for the V8-powered SUV premiered barely a week ago.

Like the Rubicon 392 concept, this vehicle wears a bonnet with a large scoop for feeding cool air into the engine bay. There are also two tiedown hooks, but they're black here, rather than silver before. The SUV rides on beadlock-capable wheels.

If the powertrain is the same as the concept, then there's a 6.4-litre V8 under the bonnet making 450 bhp (336 kilowatts) and 450 pound-feet (610 Newton-metres) of torque. It would use an eight-speed automatic and the Selec-Track full-time, two-speed transfer case. The sprint to 60 miles per hour (96 kilometres per hour) would happen in less than five seconds.

The exhaust layout includes two pairs of circular pipes, unlike other current Wrangler variants. With their black finish and outlets well behind the rear bumper, they're hard to see.

More about the V8-powered Rubicon:

Unlike the concept, the 392 decal is missing from the bonnet scoop, but this would be an easy thing to leave off from a prototype. Instead of the 37-inch Falken Wildpeak tyres, this one wears BF Goodrich All-Terrain T/A KO2 rubber. These photos don't provide a close enough view to see the size, but they look smaller than 37 inches.

The concept also had a two-inch suspension lift and monotube Fox shocks. Unfortunately, it's hard to identify whether these parts are on this prototype. The ride height doesn't look higher than a normal Rubicon, though.

According to a rumour, the Jeep plant in Toledo, Ohio, has built around 30 prototypes of the Rubicon 392. An official debut date for the production-spec vehicle is still a mystery, though. The sooner it arrives; the sooner the new model can fight against the Ford Bronco.

The prospect of a V8-powered Wrangler is still odd. Company execs were adamant that shoving an eight-cylinder engine into the bay was impossible. The bigger mill didn't leave enough crush space for the SUV to be safe in a collision. For the concept, Jeep said the engineers modified the frame and engine mounts to fit the powerplant.