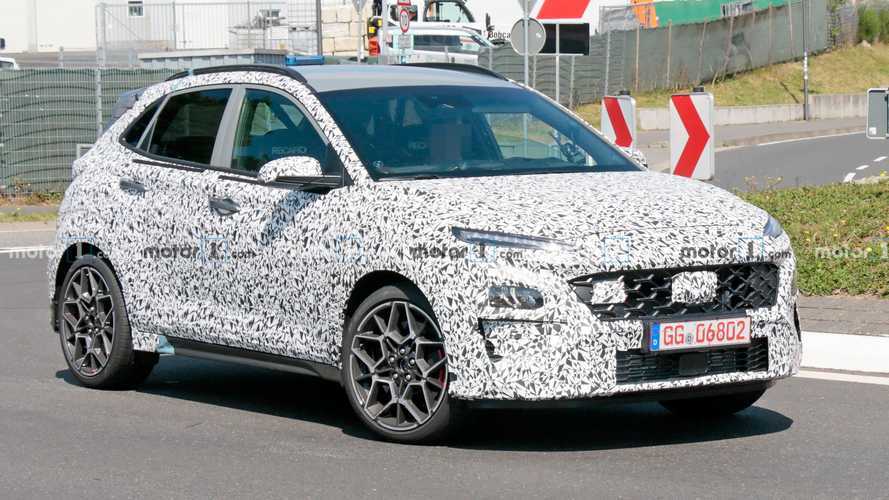 We first heard about the possibility of a Hyundai Kona N in May 2018. At the time, Hyundai had yet to green-light the model, but spy photos of the sporty vehicle emerged earlier this year. Since then, our photographers have caught the crossover out testing several times, slowly shedding its camouflage and cladding, but the latest photos give us our best look yet at the model.

The new photos show the Kona N back at the Nürburgring, where we’ve spotted the crossover several times. The cladding at the front his gone, giving us a clear look at the front end’s shape, even if it is still wearing a camouflage wrap. We can see the daytime running lights high on Kona’s face, a new grille that resembles the one on the new Sonata, reworked headlights, and more.

At the rear, we get a superb look at the roof spoiler and a glimpse of the rear lights. Below is a massive diffuser that houses two large tailpipes that’ll help the model’s rumoured turbocharged 2.0-litre breathe. The mill should produce 275 bhp (205 kilowatts) while pairing with an eight-speed dual-clutch automatic. A six-speed manual is possible, but power going to all four wheels regardless of the gearbox.

The introduction of the Kona N coincides with Hyundai’s plan to launch a refreshed of the regular Kona sometime this year. Many new styling bits the Kona N wears will also appear on the regular model when it arrives. As this is a mid-cycle refresh, we don’t expect a huge change inside, though there should be updates to the instrument cluster, infotainment system, and safety features.

The latest from Hyundai:

We don’t know Hyundai’s timeline for revealing the Kona N. Previous rumours suggested the crossover would begin rolling off the assembly line this month, but that rumour dates back to April, and we’ve yet to hear anything new. However, there’s still a chance we could see both the regular Kona and Kona N revealed before the end of the year.