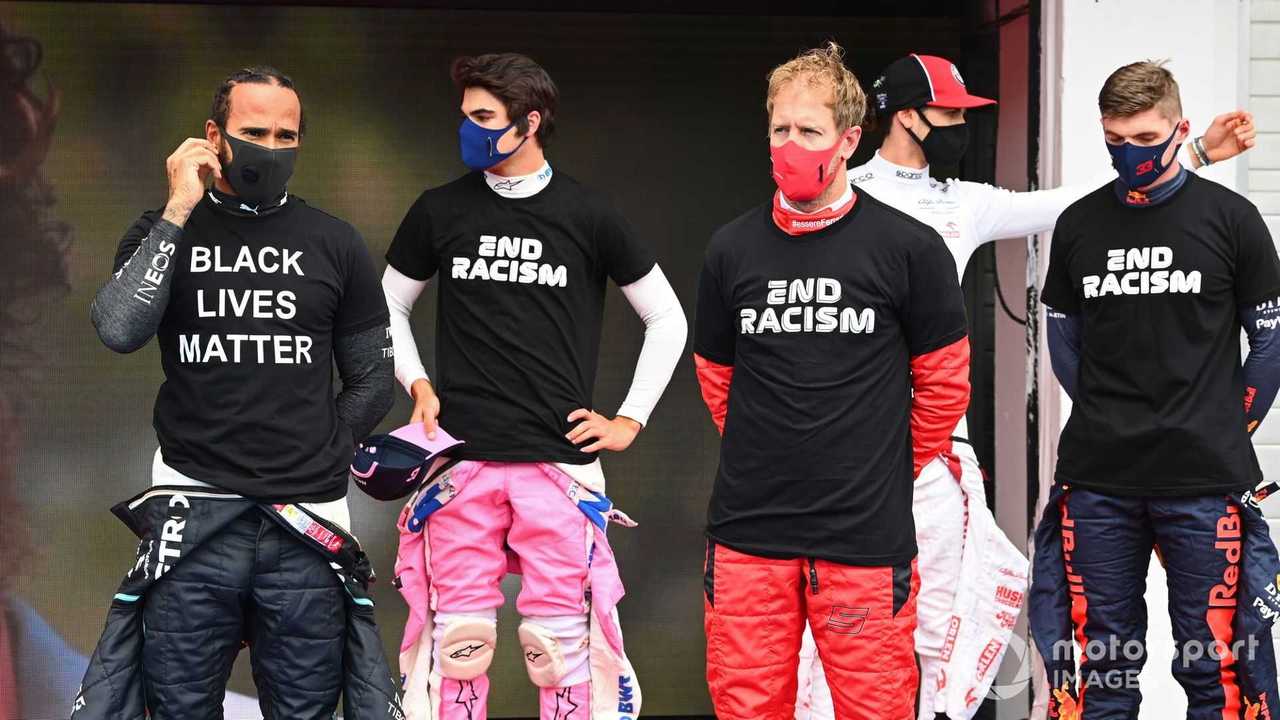 Hamilton says that F1 is lacking leadership in its anti-racism messaging, feeling the matter has “gone off the agenda” in recent weeks.

Amid ongoing anti-racism protests and activism around the world, F1 held a show of unity between its drivers ahead of the season opener in Austria two weeks ago.

All drivers wore t-shirts reading ‘End Racism’, and 14 of the 20 drivers took a knee before the national anthem in a set part of the pre-race schedule.

While those drivers took a knee again before the second and third races of the season, the arrangement was more rushed, leading to a fractured display.

Hamilton: F1 'must do better job' after rushed pre-race kneel

Hamilton has private chat with F1 drivers over taking a knee

Mercedes driver Hamilton was especially frustrated after Sunday’s race in Hungary, and called on F1 to give the drivers a better platform for their anti-racism messaging after lamenting the lack of time in the schedule.

Speaking at length after the race on the matter, Hamilton said there was “definitely not enough support” for the kneel among the drivers, and called on F1’s leadership to be stronger in its messaging.

“Many people seem to be of the opinion that they’ve [knelt] once and they’re not going to do it again. And I don’t know all the reasons for that opinion,” Hamilton said.

“Formula 1 did an OK job I would say at the first race. It’s not good enough in terms of what you see in other sports, but still it was a step forwards.

“It’s almost like it’s gone off the agenda after that. It’s lacking leadership, and ultimately, we perform in a sport. There needs to be leadership from the top, you need to come out with ‘OK hey, this is what we want to do guys, and we want you all to be a part of it’.

“Currently there is none of that. I try not to lean so much on the drivers, because I don’t want them to feel that it’s me doing it, because that’s probably, could be in some cases the reason why people won’t want to do it, because I’m doing it.

“But I don’t think it’s being taken seriously.”

Hamilton said he will contact F1 boss Chase Carey and FIA president Jean Todt to discuss the issue this week, saying it should not down to him as a driver to hold others accountable.

“You need a leader. Where is Jean in that scenario?” Hamilton said.

Asked by Motorsport.com if he felt there had been any progress in F1 by starting a wider conversation about improving diversity, Hamilton replied: “We haven’t made any progress.

“We have said things, and there’s been statements released, and we’ve made gestures such as kneeling. But we’ve not changed anything, except for perhaps some of our awareness.

“I am definitely encouraged by our team, and those that are in Formula 1 that are like, what else can we do more, what can we do better? I think it’s about communication.